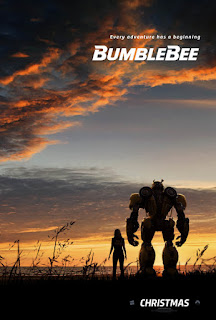 Bumblebee is a lovable transformer that may convince you that robots have emotions after all.  This is not so far-fetched; a podcast of “This American Life” verifies that robots can come up with adages that the human mind can perceive as wise (Podcast #663, “How I Read it”).  Of course it’s a bit of a stretch to take that to emotional sensitivities, but…
A prequel to the Transformermovies that started on TV in 1986 and appeared in movie theaters every few years thereafter (2007, 2009, 2011, 2014, 2017), Bumblebee(O’Brien) has been sent to earth by Optimus Prime, Chief of the Autobots, to set up operations to defeat the Decepticons, which are out to destroy earth.
Meanwhile on earth, Charlie Watson (Steinfeld), a teenage girl grieving over the death of her father is sustaining her memory of him by continuing to work on cars, their favorite activity together.  She has become sullen and self-preoccupied, but cheekily asks her mother for a car for her upcoming birthday.  Her mother doesn’t take this seriously, but Charlie has been looking in her friend Hank’s junkyard and spies a yellow VW Beetle.   She cagily bargains for it, and Hank lets her have it, giving his employee a wink that says, “if she thinks she can make that work…” good luck to her.
Charlie doesn’t realize it, but this little car is one in which Bumblebee is hiding from the Decepticons.  When he first transforms himself from a car into the giant robot Bumblebee in her garage, she’s a bit intimidated, but her fascination and curiosity makes her pause, reflect, then want to make friends with him.
Most of the action thereafter will be battles with the formidable Decepticons Dropkick (Theroux) and Shatter (Bassett), mixed in with the not-very-helpful U.S. Sector 7 interventions led by Agent Burns (Cena).
Hailee Steinfeld as Charlie continues her fine record of performances in True Grit and The Edge of Seventeen, showing a spunky, searching teenager trying to sort out her life and understand the world she lives in.  As her newfound friend/neighbor Memo, Lendeborg lights up the screen with his initially smitten character who gamely goes along with whatever comes up, eventually respecting the strange girl next door.  Playing Charlie’s younger brother, Jason Drucker, captures your attention with his realistic portrayal of a kid who looks up to his older sister, but has ambivalent feelings about her.
I think this is a worthy addition to the Transformers franchise for those who like this kind of fantasy.  And the addition of a mechanically minded girl who becomes a hero especially pleases me.

A worthy addition to the Transformers franchise.