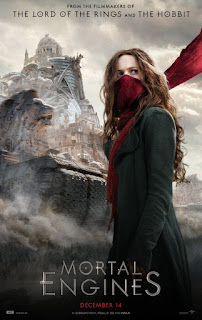 How often has someone’s pursuit of absolute power been the downfall of mortals? Far too many times in fiction and history.  In Mortal Engines, this drama is played out on the screen once again.  The film seems to have been made primarily as a special effects spectacle—and indeed these are impressive, along with production design by Dan Hennah.  I especially took to the red transport resembling an elegantly designed flying insect that belongs to Anna Fang.  But the “mortal engines”, cities, and terrain as a whole are wonderfully constructed to look like an amalgam of the ancient world and some kind of futuristic scientific technology. These set the stage for the story; with resources scarce all over the world, larger cities are gobbling up smaller ones for their resources, and enslave their populations. Director Christian Rivers’ background is in storyboard art and visual and special effects, which is surely likely to have influenced the making of the film.
Drama is secondary, although this film is better than most in the genre to portray three-dimensional human beings wrapped up in a fairly complex story.  I especially hooted/cheered about historians playing heroic as well as demonic roles.
Major players include Hester Shaw (Hilmer) who covers her face with a red scarf and has more than one person chasing after her for either good or ill.  She’s got an ongoing score to settle with Thaddeus Valentine (Weaving) having to do with her deceased mother, an archeologist who made a significant discovery.  He is head of the Guild of Historians, but has a secret major project he is determined to see come into fruition.  Tom Natsworthy (Sheehan) is a distractible historian and something of an outcast who works for Valentine, but his skills in “old technology” (“old” means prior to the “Sixty Minute War” that destroyed much of the earth—including America—and its technology) are valuable because the city of London is dying from lack of natural resources and it needs a miracle solution.
Two ancillary characters are important:  Anna Fang (Jihae), although now an outlaw, knew Hester’s mother and is bound to look after Hester if she can just locate her.  Shrike (Lang), a creature made by a group that literally deposited their own negative traits into beings they created for that purpose, wants to find Hester to force her to keep a promise she made to him.
From the opening scenes when the cities on giant wheels lumber across the countryside—one chasing the other—through the awkward romance, and to the climactic final battle, Mortal Engines seems to follow the usual script of “little” people going after the big players who have no heart and exploit everyone they can in the interest of achieving some self-serving goal.  The actors, especially Hera Hilmer as Hester, make their characters come alive and pull for your emotional reaction to them.
Mortal Engines is not a groundbreaking movie, but it will appeal to fans who like stories based on fantasy loosely tied to history and science, especially if it has glorious special effects.

Posted by donnarcopeland at 11:19 AM