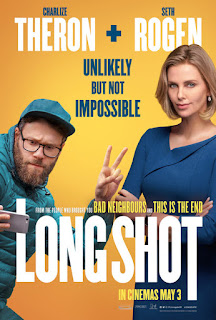 Do you ever wish you would have gone home after the first half of a movie?  That’s how I ended up feeling after seeing Long Shot.  The first part is really, really funny and clever with so many apt political aspersions (e.g., a President who is not going to run again because he aspires to a career in film) and the all-so-real character Fred Flarsky (Rogen), an intelligent nerd (ahem…journalist—but one with principles).  His emptying his pockets at a government security gate is priceless.  And check out that last name!
Playing a regal Secretary of State with charismatic elegance, Theron as Charlotte Field delightfully out-plays all her rivals.  She is so astute a politician, one has to admire her skill in diplomacy, cloaked in a gorgeous appearance, as she plugs a project that she has been invested in since a budding activist in high school.
An unlikely couple?  Well, yeah! This is what gives the comedy depth—a real-life situation.  She used to babysit him, and he has had a crush on her ever since.  It’s gratifying that, despite her charisma and political know-how, Charlotte is shown to have a solid grounding in principles of social concerns.  This is the making of what could be a gripping comedy with truth and heart.
Unfortunately, the filmmakers are playing to what they perceive is the money-making audience, so drugs are introduced.  Ha-ha!  So funny!  But lo and behold!  These drugs are shown to be an aid in a high-level diplomatic negotiation.  (It’s only ever going to happen in a movie.)
From there, the filmmakers once again take the crowd-pleasing way out, and concoct an ending that—once again—could only happen in the movies.
This production has so much talent in its filmmaking and acting components (director Jonathan Levine, Theron, Rogen, Odenkirk, Serkis, Skarsgard, e.g.), and not many would have expected that Theron and Rogen could have achieved such a convincing connection.  But it’s a shame the easy way out was chosen, rather than a riskier, bold, and insightful approach that would shine a light on our current world.
In the end—such potential squandered on crowd-pleasing turns is very sad.

A fine comedy with potential to make a bold statement chooses the soft way out.

Posted by donnarcopeland at 7:50 AM