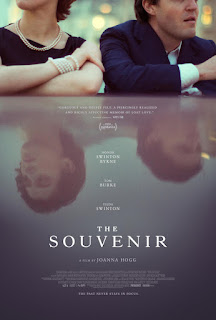 I don’t recall ever wanting so badly for a movie to be over.  Right from the beginning, it’s obvious how the story is going to go, with the star having no capacity to make decisions or assert herself, or even stand up for herself when she is being taken advantage of. She doesn’t bill a roomer who should be paying a share of housing, and tolerates a sponger who contributes little to nothing in the relationship or anywhere else.  And when there are clear warning signs glaring at her, she remains passive, and asks for forgiveness for being so “mean.” She seems like an anachronism in today’s world, in which women are tuned in and wanting to establish themselves in their personal and professional pursuits.  The film is set in 1980’s London, but I see no purpose in harking back to those mores.
Julie (Byrne) attends film school with aspirations for being a filmmaker. We see only snatches of her work, but it appears she is both writing and directing her first feature.  She is still dependent on her mother (Swinton), and although they appear to be close at times, Julie never seems to confide in her, even when she is in crisis.  We don’t see any conflict between them; we only see her asking for money from her mother.
Anthony (Burke) appears on the scene, and although he isn’t romantic in any way—in fact, he’s rather cynical and critical—Julie falls for him. Anthony purportedly has some kind of job in the government (the Foreign Office, he says), but it’s not clear exactly what he does.  He tells Julie stories about it, but then says, “Oh, I’m just kidding.” He conveys very clearly that she is not to ask him questions about his life, past or present.  If she does, he responds with, “You’re inviting me to torture you.”  His presence in her life distracts her from her studies, and as things go from bad to worse as she catches him in lie after lie, she doesn’t seem to know what to do.  What?!?
Although written and directed by a woman, Joanna Hoff, and being something of a memoir, Souvenir (named for a painting of the same title by Jean-Honore Fragonard that Julie and Anthony bonded with during a trip to the museum) is surprising in its foreshortening characters to little more than stick figures, limiting conversations to little more than trivia so that we learn very little about who the characters really are, and in its lacking any semblance of intimacy in any of the relationships depicted.  A case in point is when the couple looks at the painting, has slightly different interpretations of it, but neither is given a chance to expand on his/her point of view. This was apparently an intimate, meaningful moment between Julie and Anthony, but it’s not made explicit for the viewer.
Editing (Helle le Fevre) doesn’t help much; scenes pop up in which the viewer has to figure out who the people shown are and what they are about.  Prime example is a scene in a parking lot with a van waiting for people to board—the last person being Julie.  Finally, when we see her we know that this is her film crew getting ready to travel somewhere.  There are only snatches of Julie’s filmmaking, so the people boarding the bus are not immediately recognizable.
Acting by the three stars, Honor Swinton Byrne, Tilda Swinton, and Tom Burke, saves this film from being a complete washout.  Although the film has initially been well received, to me, its point of view is one of detachment, with little introspection and psychological exploration or explication of the characters.  Scenes are more often than not cut short before we can see the players’ emotional reactions to what has just happened.  Primarily because of these characteristics, I lost interest in the story early on.

A naïve young woman, aspiring to be a filmmaker and getting involved with an older man is a story with potential, but curiously lacks much passion in the telling or in the enactment.