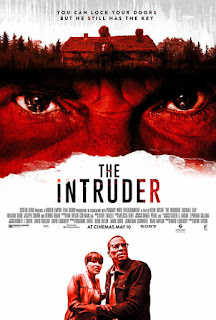 You know a movie script is bad when the audience laughs at things that are not intended to be funny and groan at characters’ poor decisions.  This describes The Intruder, written by David Loughery and directed by Deon Taylor.  There are so many flaws in it, the audience can’t take it seriously.  Most annoying is a blast of loud music just after a dialog that is so low you can barely hear it.
The story is about a young couple who gets excited about buying a house in Napa, which is expensive, but its grounds are lush and gorgeous and it’s near some woods, so when the owner comes down on the price and offers to leave furniture and everything as is, they decide to take the plunge.
The owner Charlie (Quaid) is very friendly and welcoming and clearly loves the house. He’s a bit intrusive and possessive, which is irritating to Scott (Ealy), but he wins over Annie (Good) with his “charm” and some sad stories of his life recently.  Charlie is expecting to leave soon for Florida to be with his daughter, so Annie and Scott both try to ignore him and enjoy their new treasure.  Nevertheless, she is especially drawn to him, feels sorry for him, and, to her husband’s dismay, even invites him for Thanksgiving dinner with their friends.
It’s so easy to see where this is going, which takes away from much of the suspense the filmmakers must have hoped for.  Charlie keeps reappearing, even when Scott tells him to stay away, and things go from bad to out of control, despite a newly installed security system.
The acting is reasonably good; Dennis Quaid is able to convey creepiness even when he is bringing gifts, and his gradual dishevelment across time shows his skill. Meagan Good and Michael Ealy are both very attractive, and clearly show the concern that evolves as fears of Charlie increase.  Joseph Sikora seems miscast, though, in his not conveying the urbanity of a sharp advertising executive from the city.
Just as the couple’s situation goes from bad to intolerable, the viewer’s experience of this film is likely to evolve in the same way.  At first, there is some disbelief, but gradually, you just have to throw up your hands at the ridiculousness.

You can skip this poorly crafted film, which seems to be following an amateur playbook.