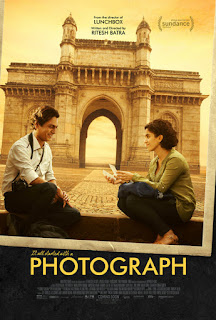 Photograph is very similar to writer/director Ritesh Batra’s previous film, The Lunchbox in its quiet love story where the protagonists are unassuming people who manage to fall into each other’s world quite by accident. In this production, Mumbai street photographer Rafi (Siddiqui) takes a picture of Miloni (Malhotra), but after she has paid for it, she gets distracted and walks away while he is struggling to put it in an envelope.
We wait to see if they will ever see each other again, and sure enough they do, and he is able to give her the picture.  It turns out, the timing is exquisite for both of them.  Her parents want to give her picture to a friend whose son is about to depart for the United States; they see a match here.  And Miloni is able to supply the snapshot. Rafi has a doting grandmother who threatens him in all kinds of charming ways if he doesn’t find a wife soon. And, oh! she is coming to visit him soon.
Rafi, while devoted to a grandmother who made sacrifices for him and his siblings, is shown to be a very careful man in conducting his life.  He doesn’t move quickly in any endeavor, so there are no prospects in his horizon for a wife.  He cannot bear to disappoint Dadi (Jaffar), so he uses his imagination in pulling out Miloni’s picture while a song entitled “Noori” is playing, and voila! he creates a girlfriend named Noori he can tell her about.
But Dadi won’t be satisfied unless she is able to meet her, so Rafi has to ask Miloni to meet Dadi, say her name is Noori, and play along as if she is his chosen one. Shy, self-effacing Miloni is intrigued by this, and decides she will help Rafi.  Plus, there seems to be a mutual attraction between them that neither seems to fully comprehend.
The charm of Photograph lies mostly in the innocence and trust of all involved, from the two main characters to Rafi’s friends and family, to Miloni’s family.  The charm throughout is remarkable because Miloni is from a privileged background, whereas Rafi and his family are of more modest means, yet all are honorable with similar values.  Batra shows how people from different social strata can come together so easily if outside social constraints are absent.  Cagey Dadi has figured out that her grandson’s love is from a different station, but she goes no further than letting Rafi know she knows.
This film is not for everyone with its slow pace, studied character development, and social commentary.  But for those who can appreciate a simply told story about people in another country where most of the characters are admirable, it will be refreshing.

This is an Indian adventure that is close-up in portraying real people with minds of their own.