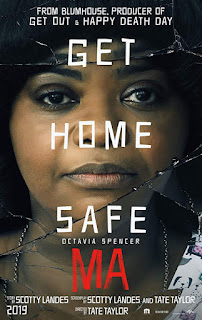 Successfully blending chilling horror, high comedy, and serious drama with intelligence is a rarity in the world of filmdom.  But director Tate Taylor, writer Scotty Landes, and actress Octavia Spencer have together achieved just that in Ma.  It’s cleverly paced, so that the characters are a bit puzzling in the beginning—especially Spencer’s lead character Sue Ann—or they seem to fit a well-known trope that makes you think they will be predictable.
But not much is predictable in this horror-farce; it’s delightfully surprising almost every step of the way.  Even the ending.  As the story gets more and more complicated, one wonders how the filmmakers are going to resolve it, and they did a good job.
Maggie (Silvers) and her mother (Lewis) have moved back to the mother’s hometown after a sojourn in California.  Maggie is a teen and a bit apprehensive about the first day of school.  She first meets a shy classmate in a wheelchair and helpfully gives her a push when she needs it before entering her own class.  There, she is immediately welcomed by extrovert Haley (Miller) who treats her like an old friend, invites her to a party, and disparages her for declining in favor of going to a concert with her mother.  When the concert falls through, Maggie gets back on board for the party, and is immediately taken in by Haley and her three friends.
They’re a raucous high school group all ready to party and drink.  They have a ruse for getting drinks by asking a passerby outside a liquor store to buy them liquor.  This is where Sue Ann comes in and refuses at first to oblige them, lecturing them about drinking.  But just as she will any number of times, she later pulls the “Just kidding” routine, and even has them come to her basement to party rather than going to a favorite place for teens outside of town where they might get caught.
This is all great fun, with Sue Ann joining them and becoming close so that one teen slips and calls her “Ma”, which she seems to like.  But gradually, things start becoming weird.  The teens attempt to distance themselves, but they have no idea whom they are dealing with.  We the audience are privy to some of her actions, but even we won’t know the half of it yet.
Octavia Spencer lives up to her award-winning performances, and this is likely to be one of her “best yet.”  She is new to the horror genre, and proves that she is well up to a starring role as a psychologically complex figure who displays a range of temperaments, antagonisms, and personal qualities.  Hopefully, she will be recognized at awards time for her brilliance in this role.
One of the intelligent features of Ma is its illustration of precursors in Sue Ann’s life that helped form her current personality, including when we get an inkling of Munchausen syndrome. It highlights the destructiveness of teasing, along with the obliviousness of active and passive participants to its cruelty.  So the movie is more than thrills, chills, and entertainment; it touches on elements of peer pressure, over-reactive parents, drug use, and taking action in an emergency.  It’s also about the sins of a father being visited upon his progeny.
Not to be ignored are the numerous truly funny scenes that take place, sometimes during horrific incidents.  Just two prime examples are in addressing one character’s talkativeness, and the other in infusing a bestial character with sera meant for a dog. But also, Allison Janney’s Dr. Brooks, a veterinarian with an acerbic air who is Sue Ann’s boss is priceless; a perfect cameo.

Who would not want to see such an intelligent horror-comedy with a heavy dose of drama?

Posted by donnarcopeland at 11:19 PM