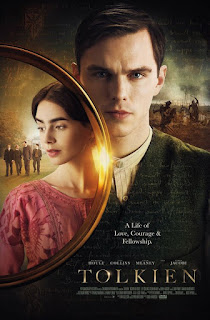 J.R.R. Tolkien’s image as a mystical figure with a magical mind makes a story about his life quite the challenge.  But director Dome Karukoski and writers David Gleeson and Stephen Beresford have made a valiant effort in capturing his early inspirations (an imaginative mother who home schools her boys in Africa, acts out the stories she reads to them, teaches them languages, and instills in them a reverence for books), his traumatic experiences (deaths of parents, a horrific WWI), and the love of his life, Edith, that almost assuredly influenced his popular and revered works, The Hobbit and The Lord of the Rings.
Above all, the film shows Tolkien adhering to values that were ingrained from childhood, ones so internalized that he was able to comply with his strict guardian’s proscriptions against associating with his love for three years (ages 18 to 21) and risking his life to seek out and protect a friend during wartime.
I understand the film is not endorsed by the Tolkien family and his estate, which may put a negative light on it, and well-versed readers of the books may have problems with the film as well—all perhaps justifiable.
As one not well versed (having seen only a couple of films), I thoroughly enjoyed the film’s sensitivity to the emotional elements and entanglements shown, the artistic technique of inserting graphic memories of his life into Tolkien’s war traumas, and the abiding love story between him and Edith, all of which, I think, have a ring of truth to them.
Nicholas Hoult (as well as the young Harry Gilbey) captures the role of Tolkien seamlessly, showing all the sincerity, befuddlement, and playfulness of the character.  Lily Collins shows the mischievousness and intellect that must have been Edith’s in the appealing manner intended.  Derek Jacoby’s ingenious cameo as a philology professor is priceless.
Much to be admired in this production include the artistic contributions of cinematographer Lasse Frank Johannessen and musician Thomas Newman. Johannessen’s camera serves as a guide throughout, showing devastating images of war, the playfulness of a group of friends, and the nuances of urban and rural scenes.  Newman’s music brings the cinematic and story portrayals together to make an emotional and meaningful whole.

A film worth your while whether or not you’re a hardcore fan/expert on J.R.R. Tolkien.