CHRISTMAS ON THE SQUARE 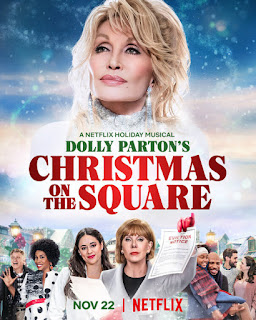 Maybe, partly, with all that is worrisome going on in our world today, I wasn’t quite in the spirit of Christmas when I viewed Christmas on the Square.  But as much as I’ve always loved Dolly Parton, there is just too much sweetness in this movie.  The music, choreography, sets, and acting are all first-rate, but the predictable script by Maria S. Schlatter pulls at the heartstrings so often, and the emphasis on angels and miracles is so fantastical, I found it a bit cloying. It is possible that more conventionally religious people than I could find it moving and inspiring.

The main character Regina (Baranski) is shown to be a real witch, always disgruntled and dismissive of others with no nostalgia for her hometown or empathy for its residents.  She is even rude to her lifelong best friend Margeline (Lewis).  After her father’s death, Regina buys the town and looks to make a neat profit by selling it to the Chita Mall (cheat ‘em all?) to develop the biggest and the best shopping haven.  To add insult to injury the residents are all to be evicted on Christmas Eve.  “Life is not a fairy tale”, Regina sings with a new acquaintance who, unbeknownst to Regina, will be a major instrument in the alteration of her world view.

Moreover, what she doesn’t realize is that there is an angel (Parton) and an angel-in-training (Mason) who are behind the scenes manipulating her to change—for the good, of course!

In that sense, the film makes some solid points in modeling encouragement and forgiveness toward others, and in telling a back-story that explains how Regina came to be the person she is.  Moreover, to its credit, the wide diversity of the cast expands on the principle of tolerance.

Dolly sings often in the story, starting out as a humble figure on the square with a box labeled “Change” (a fitting theme of the film) and validating her vocal fame. Although not known as a singer, Baranski does a very credible, lyrical job in singing her role, and her acting skill for which she is known, is very apparent.  Duets of the pastor (Segarra) and his wife (Haskell) and their solos highlight their musical assets.

A highlight of the film for me is the conversation between Regina and Violet (Jones), a child bartender (don’t worry; it’s reasonably explained).  The child is shown to be unusually perceptive (as children are known to be) and wise beyond her years, as she notes in questions about her role as a bartender.  The biggest delight of the movie for me is the conversation the two have, in which the script is strong, and the rapport between the two actors so strong and touching, one is aware of two talented actors at their best.  Not surprising for Baranski, of course, but impressive where young Selah Kimbro Jones is concerned. I can hardly wait to see her in more films.

So, my review is mixed, as the movie is likely to be a hit among families (at least those who are Christian) looking for an uplifting movie and others who maintain a wish/belief in miracles.  For those who are skeptical or take a dim view of the traditional “Christmas movie”, you probably won’t be attracted to it.  I’m not sure how people of very different religions will regard it.

A movie for those in the Christmas spirit who revel in the magic of the season.  It may not be apt for those of different faiths or those with a more nonsectarian bent.

Posted by donnarcopeland at 9:12 AM