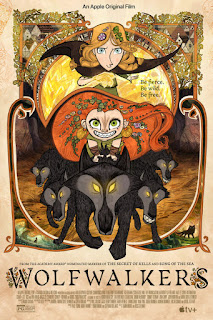 As the story goes, Robyn (Kneafsey) has aspirations to be like/with her father, hunting wolves who are destroying the crops and frightening the farmers of Kilkenny.  The most cringing moments (for me), along with the threat of death, were the countless times Robyn’s father (Bean) would not listen to his daughter and the Lord Protector (McBurney) would not listen to him.  There are nail-biting scenes full of danger, so only older children able to tolerate life-threatening drama should see it.  The movie may not be for younger children.

Robyn is a willful child, and despite her father’s admonition to stay at home and clean the house, she cannot help herself from venturing out with her trusty bird Merlin.  This presents a dilemma for him, as he has promised his deceased wife to protect Robyn at all costs.  He is befuddled by his daughter’s behavior of sneaking out of the house, because he has a moral imperative to obey authority.  When he runs into his daughter in the wild—where the wolves are—he can only state what he has learned.  “Go back home”, “Be a good girl” and “do what you are told.”  “I promised your mother I would keep you safe.”  (Her mother is no longer alive.)

The excitement and key to the story comes when on one of her forays Robyn encounters a wolfwalker’s child, Mebh (Whittaker) and they become fast friends.  When they have to help each other they do, but sometimes it is at great risk for both.  Keep in mind that humans can turn into wolves and back again, which requires a certain degree of abstraction on the part of the viewer.  For inspiration, writers/directors Tomm Moore and Ross Stewart took the wolf from mythology—a being that is regarded as wise as a person as well as a partner to humans.

Drawings and animations are half of the enjoyment of the movie including the music (Bruno Coulais and the Klia).   But the story is maximally engaging, enhanced by the animation and special effects.

For devotees of animation and folklore, this is a movie for you.  Lots of excitement and suspense, all with great depth.