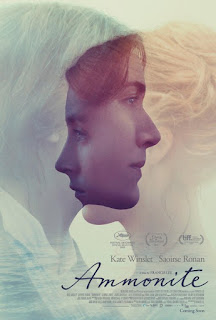 A film about identities—perceived, altered, and evolving across time.  We see two women thrown together by outside forces, one naïve and entitled and one jaded, expecting nothing from anyone.  They couldn’t be farther apart; yet because of circumstances and the blooming curiosity of one of them, they are drawn to one another.  But that’s not the whole story.

Mary (Winslet) is a paleontologist denigrated by men in the profession, even though she has earned a reputation for discovering many valuable fossils. Charming Roderick Murchison (McArdle) comes seeking her out to “learn” from her and participate in her work. She is only nominally interested, and endures his presence with only a modicum of patience.  And, oh, by the way, he has a wife Charlotte (Ronan) who is ailing and not able to accompany him on his scientific forays. Wouldn’t Mary be willing to care for her, take her along on her daily visits to the shore in his absence? She would be paid handsomely.

A number of scenes show very clearly how subjugated women were in the 19thCentury.  They tended to follow orders with no sense of being able to refuse.  In her role of supporting her aging mother and achieving some respect in her work, Mary has achieved a certain degree of both self- efficacy and resignation in the face of power.  But she agrees to allow Charlotte to stay with her and her mother.

We will see that scenario play out by two of our best actors in moviedom.  Kate Winslet has made at least a dozen movies for which she was nominated for major awards since the mid-90’s.  She was awarded an Oscar for The Reader.  About twenty years her junior, Saoirse Ronan seems on the same path toward high regard, being nominated by major awards for five of her six films in the 2,000’s.  The two pair together extremely well in Ammonite, each bringing the best of her talents in portraying complicated characters.  Winslet’s is probably the more difficult because Mary’s life has so much internal depth that rarely emerges and she must convey much by facial expression, posture, etc.  Ronan must come across as more inhibited and in the shadow of her ambitious husband in the beginning.  In his absence, we see her more dynamic assets blossom.

Francis Lee has mostly been an actor on television during his career, and it’s remarkable that Ammonite, his second film to direct (and in this one he is screenwriter as well), is not being nearly as well received as his first, God’s Own Country, for which he won a BAFTA.  The pace in Ammonite seems to have made some people yawn, but delving into characters’ makeup—something I’m attuned to—issomething I actually enjoy, so the pace worked well for me.  As to its being too similar to previous films, I see it as being very different from, say, Portrait of a Lady, in which even though it is British and set in an isolated beach venue, it is very different in the characters of the two women in each film.

Although Ammonite has some of the marks of a new director, I find the acting performances and script bring it to a level I can endorse.

Ammonite is for viewers who love period dramas and relish actors who are exemplary in their portrayals.