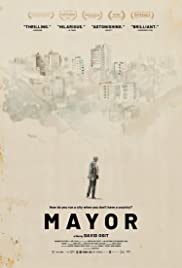 Mayor. A noble politician—one seldom seen perhaps. But here we have the mayor of Ramallah, Musa Hadid, trying to steer his Palestinian city through what Palestinians would say is illegal Israeli settlements and incursions into their territory, particularly recently, under Netanyahu.  The Palestinian territories of the West Bank and Jerusalum have been occupied by Israel since 1967.  Jerusalem is a contested capital just 10 miles from Ramallah, a historically Christian city and the seat of the Palestinian government, as well as the epicenter of Palestinian commerce and culture.  It’s an area where Israeli settlements have been increasing.

This documentary is a picture of Mayor Hadid’s day-to-day activities in Ramallah leading up to the designation of Jerusalem as Israel’s capital and President Donald Trump’s support of it by moving the U.S. Embassy there from Tel Aviv.

David Osit is the director, producer, cinematographer, and editor of Mayor, a tall job, but one I think would have benefited from additional eyes on his work.  Specifically, it’s clear he knows all about his subject and all the back stories; and perhaps because of that, we’re not given all the information we need to understand dramatic—or even everyday—events occurring before us. He’s not aware of what we as a public do not know.  We have to guess what a certain discussion or obviously disturbing events are about that are being shown on the screen.

The ultimate message is clear, though.  From the film’s viewpoint, the Israelis have encroached upon Ramallah with their settlements and military incursions, taking away the Palestinian’s ability to keep up infrastructure and maintain amenities in their town.

Covered in the film are the political efforts by Mayor Musa Hadid and the Palestinian President Mahmoud Abbas to convince other countries—specifically the U.S. and Great Britain—of their plight.  A poignant observation made by a Ramallah citizen is, “People don’t know about us.”  And as a U.S. citizen, I have to admit that I was not aware of their plight.

But this is a heroic attempt to inform us of a place in the world that is under threat and needs our attention and concern.  For that, David Osit is to be congratulated on highlighting a conscientious, admirable civic leader and his attempts to do his best—a figure sorely needed in our time!

A well crafted documentary informing us in a very human, delightful way about the plight of a city needing support by the international community.

Posted by donnarcopeland at 10:20 AM