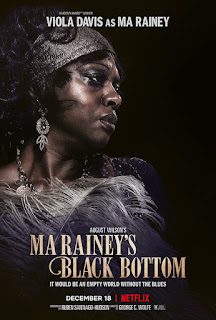 In this presentation, Viola Davis is completely transformed from her normal Hollywood public appearances—stylish, well spoken, and winner of Triple Crown Acting (Oscar, Emmy, Tony) awards, into a character called Ma Rainey, a flashily dressed, deep-voiced blues singer in the 1920’s known as “Mother of the Blues” who could invariably captivate her audience.  She was somewhat a mentor to the legendary Bessie Smith (“Empress of the Blues”) who would come after her, and between the two of them their music helped usher in the popularity of the Blues genre.

This story is about an attempted new recording of Ma Rainey’s Black Bottom Band and the internal and external struggles they endure as they interact with one another, the recording studio, and ever-sinister threats from the white community.  You see the force of Ma Rainey’s personality in her demands (repair of her car in a minor accident, Coca Cola, a fan, etc.), knowing she has the trump card of her and her band’s presence.

That part of the movie is tense and still somewhat entertaining, but the part that really glued me in is when different men in the band describe their encounters with racial injustice, the all too often Black experience in America. This is when you know the movie is not simply about a funky band.  It’s telling us—once again!—about the importance of racism in our country. Yes, we can say this movie takes place in the 1920’s, but when we see the protests and behind-stories associated with them in 2020, the points hit home.

Davis shows us again that she is a wonder in acting by fully embodying her character and keeping the viewer honed in on her.  Chadwick Boseman—as irritating as his character is, even though he may be right in what he is arguing—is one of the elements of the movie that makes it work, simply by his sheer ability.  (We will miss the actor for many years hence.)  The other supporting actors are impressive in their portrayals, and bring authenticity and emotional valence to the film.

As significant and touching as I see the arguments among the band members and those between Ma Rainey and between the white agent and studio head from a social standpoint, as a viewer I found it hard to watch for such long scenes in the movie. I kept wanting to leave it and go do something else.  This may be my whiteness coming through, but such incessant arguing is never productive—as we will see by the end.

The “Staginess” of the production was a distraction for me.  The movie is based on August Wilson’s stage play (Broadway, Royal National Theatre in London), which was very successful. But as so often happens, converting a stage play to a movie unfortunately shows it as a replication of a stage play.  For much of the time I was watching, it really seemed like a film of the play. I’m not sure exactly why this is a drawback, but I’ve seen it so many times before, as in Fences.  Movies need to look like movies.

I am mixed in my reactions to Ma Rainey’s Black Bottom, about which I find both positive and negative aspects.

Ma Rainey’s Black Bottom is to be seen as a chronicle of Black experience in American music.