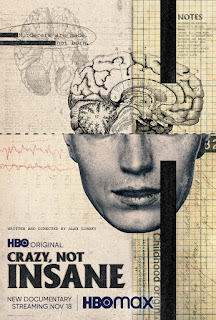 A documentary by Alex Gibney features a psychiatrist who has tried for years to convince the legal profession that the death penalty should not be used on those who have serious psychopathology because those people are missing the controls that keep the rest of us from doing heinous acts.  Her basic question has been, “What keeps us [you, me, everyone else] from becoming a murderer?”  Having interviewed extensively 22 serial killers and scores of other serious offenders, she posits that Identity Dissociative Disorder (previously, Multiple Personality Disorder) accounts for the majority of them. She finds these other identities in perpetrators she has interviewed by eliciting them from family history, hypnosis, and psychological tests, and always verifies that these people also have organic signs from neurology and imaging tests that suggest physical abuse—usually coming from parents.  I get the impression that it takes personal histories including interviews, neuroimaging, and psychological tests altogether to confirm an identity disorder leading to murder.

Working with Clinical Psychologist Dr. Catherine Yeager, neurologist Dr. Jonathan Pincus, and defense attorney Richard Burr, psychiatrist Dr. Dorothy Lewis assembled a team to examine very carefully common precedents to the horrendous acts performed by killers.  Her interviews of these people are fascinating not only from the information she elicits, but the trusting bond she is able to achieve with them. Her evaluation of perpetrators in hypnosis will be particularly interesting to those who have never observed a hypnosis interview that pulls out different identities in the same person.

Yes, you may be skeptical, but when she shows different signatures (no, not your usual variations seen) from one person on different occasions sometimes using a completely different name; differing responses to psychological tests (as in one case, one being psychotic and the other being completely rational), and various personalities emerging during interviews, it’s very convincing.

Another fascinating encounter is Dr. Lewis interviewing an appointed executioner (electrician on the side) who in his job as executioner, claims to have absolutely no feelings about what he does.  But the pictures he paints after each execution might indicate something more going on in his psyche than he realizes.

It is disturbing to those of us finding convincing evidence in Dr. Lewis’ studies to see protesters outside courts and other places chanting that someone should die.  What draws the general populace to such occasions?  Why are we drawn to hangings and other formal occasions of death?

This film attempts to answer these questions in a comprehensive, insightful way—no easy answers.

A documentary for those wishing to explore the issue of capital punishment of the mentally ill.

Posted by donnarcopeland at 6:52 AM