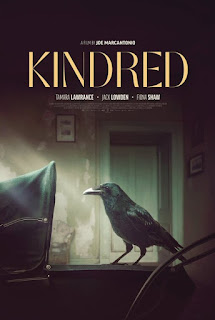 It’s very difficult to write a good horror story, and Kindred serves as an example of what can go wrong. Making the story horrific and plausible where the plausibility enhances the terror is key to a successful horror film or book.  Jordan Peale’s Get Out is a prime example of success.  Even though there’s only a remote chance that any of us will come across the experiment shown, everything that led up to our realization was convincing in its normality.  Kindred, on the other hand has so many characteristics of implausibility, the viewer is immediately taken out of the fantasy.

Charlotte (Lawrance) and Ben (Edward Holcroft) are a happily married bi-racial couple who are excitedly planning to move to Australia from England, both to get a new start and for Ben to distance himself from his over-controlling mother, Margaret (Shaw).  The first kink in their plans comes when Charlotte discovers she’s pregnant, even though they had been using birth control.  She’s not happy; her mother was not ideal, so she has doubts about her own ability to be a good mother (note:  an early set-up for later on in the plot).  The second is that Ben is killed in an accident (this is in the preview of the movie), and Charlotte is taken to Margaret’s house to recover—without her consent.

Living with Margaret is her stepson Thomas (Lowden) whom she treats less like a relative than a servant.  And he is completely devoted to her.  Very soon, it becomes clear that Charlotte is trapped—no phone, no means of transportation, but under the control of Margaret and Thomas.

In addition to the cheap shots with symbols of black mockingbirds (mocking-birds—get it?), we have to be convinced that Charlotte has no means of escape, that her loyal friend without any apparent reason will betray her, that the medical profession can be bought or duped, that two people as crazy as Margaret and Thomas can enlist so many people into their trust, and that…oh well, that’s enough.  There are too many elements that make the viewer think, “Oh, c’mon!”

Although most of the actors in Kindred are not well known—except for Fiona Shaw (“Killing Eve”), they all do a credible job in portraying their characters.  Experienced Shaw is the most effective in exemplifying an outwardly noble but inwardly devious character.  A comic element is in seeing physician Dr. Richards (Anton Lesser) conspire with Margaret, as his character Qyburn did with Queen Cersei in “Game of Thrones.”

Beyond that—granted, a small point—there is little to recommend this film; I found it torturous to get through.

Kindred may only be appealing to those who like to experience fear without much thought of reason.