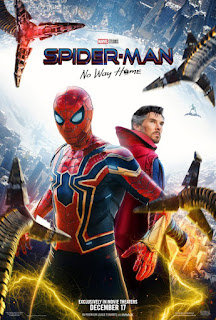 This edition is most remarkable for cleverly integrating past Spider-Man movies and their characters into Spider-Man:  No Way Home.  If a viewer has not seen or can’t remember the past versions, it is easy enough to follow the plot.  However, a much richer experience will be had by those who have kept up with all the versions through the years and recognize all the past characters referenced and the actors who play them.

The story opens with the chaos caused when Spider-Man’s identity is revealed to be Peter Parker (Holland).  The star broadcaster J. Jonah James (Simmons) at the Daily Fix has seen to that.  The item surfaced when the criminal illusionist Mysterio in his dying breath revealed the identity of Spider-Man, who had just killed him in the previous Spider-Man:  Far From Home (2019).  But now, Mysterio is being made a hero, and Spider-Man  as the presumed villain has to deal with the public rancor that ensues, along with monsters that are suddenly showing up mysteriously on earth.

Peter has sought the help of Dr. Strange (Cumberbatch), who condescendingly agrees to help, but is super-annoyed when Peter keeps interrupting the spell with conditions he thinks of while the spell is being produced.  This has consequences, the extent of which Peter only realizes later, making this something of a coming-of-age story.  It’s going to come home to Peter that gifts he has received come with responsibilities, and the process of learning that is repeated throughout this story line.

Production of this version of Spider-Man directed by John Watts is engaging in its special effects and script by Chris McKenna and Erik Sommers, based on the Marvel comic by Stan Lee and Steve Ditka.  The cast realizes the action by numerous talented actors:  Tom Holland, Zendaya, Benedict Cumberbatch, Marisa Tomei, Alfred Molina, Willem Dafoe, Jamie Foxx, J. K. Simmons, and others.  All are top-notch.

Like many films nowadays, judicious editing could have improved the production and reduced it a half-hour to a two-hour limit.  The story bogs down in the middle when one super-human sequence follows another, with technological aspects of filming taking precedence over story and characters.  I’m compelled to reiterate my usual irritation with these movies inevitably ending with a fist fight between two characters followed by tender, emotional scenes meant to pull on the heartstrings.  I like the latter, but why the fist fights when the characters have access to all kinds of technological tools?

With such a clever script, this is probably a true gem for Spider-Man and Marvel Comics fans.  For others, it can be mostly entertaining, except for the length.