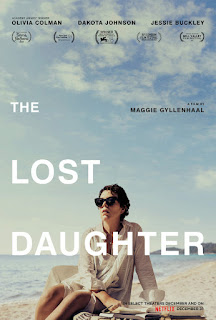 We meet Leda (Colman) as she is arriving in a small coastal town in southern Italy for a vacation.  We find out later that her two daughters have gone to live with their father, and as a writer and English professor, she is looking forward to some quiet time to write.  But she does not anticipate getting involved with other people on holiday and her own festering conflicts long unresolved.

On the noisy beach, Leda begins to observe families.  Although a number of people approach her with friendliness—Will (Mescal) the resort attendant, Lyle (Harris), and various others—she responds warmly but seems to keep them at a distance.  She becomes intrigued in observing a mother (Nina, played by Johnson) and her daughter Bianca, being reminded of her own ambivalence in mothering her children.  And Bianca seems to be annoying to Leda at first, but when the child goes missing, it is Leda who finds her and returns her to her parents.

There are many flashbacks to Leda’s younger years when she was married and a young mother.  A proven actress Jessie Buckley captures the personality of the younger Leda, and we see her in sometimes playful and always creative, sometimes trying, interludes where her ambivalence about the responsibilities of motherhood is obvious.  But these seemingly trifling moments become significant factors later on when she acts on her impulses to develop a relationship with a Professor Hardy (Skarsgaard) who praises her work in glowing terms.

This is Maggie Gyllenhaal’s debut in directing a feature film, and she is likely to receive commendations for her work.  The story line is finely modulated, the cast well chosen, and the subject of the film in terms of women managing family and career is topical.   But the emphasis on the ambivalence of motherhood is rather unusual in films, especially one done with a sympathetic attitude.  As we come to know Leda and develop some understanding of why she does what she does, her actions become more understandable.

The pairing of the younger Leda actress Jessie Buckley with the older Leda, Olivia Colman, is one of the strong points of the film.  Buckley shows herself able to be paired with the experienced and renowned actress Colman.  Also, the film touches on many issues affecting women—and specifically actresses—today.

A slightly disturbing take on an outwardly successful woman’s past and present experiences that may or may not make her understandable in today’s light.

Posted by donnarcopeland at 9:15 PM