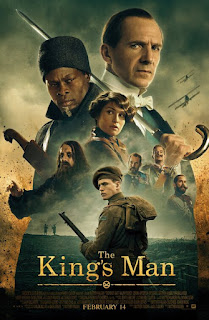 This third Kingsman movie in the series is to serve as a prequel to the first two:  Kingsman:  The Secret Service (2014) and Kingsman:  The Golden Circle (2017).  It’s all about how a private secret service got formed in Great Britain and who was behind it.  The Kingsman films are based on a comic book series by Mark Millar and David Gibbons.  The first film, was more positively received than the second.

In this current version, the title The King’s Man implies something different from the previous two films.  The King’s Man (presumably referring to the duke of Oxford (Fiennes), is someone with meritorious service having a change of heart after a number of successful battles, and now wanting to work toward peace as opposed to proving his manhood (over and over) by military feats.  It was his wife’s dying wish that he would not lead their son Conrad into battle.  After meritorious military service, he quite readily accedes to her and promises that Conrad will never go to war.

This promise is the crux of the film in that as the years go by and Conrad (Dickinson) grows up admiring his father’s service, he wants to follow in his footsteps.  What ensues is an account of times when the father stands in his way and other times when Conrad insists on making his own choices.

The film is good (and humorous) in showing political intrigue (The Kaiser of Germany, Nicholas, Tsar of Russia, and King George—all descendants of Queen Victoria—comprising a triple competition) and the uncertainty of outcomes in both dramatic and personal costs.  Ralph Fiennes’ performance is the best part of the film.

The many sword plays and cliff-side terrors can be exciting, but because of their length, tend to make the viewer lose focus.  Some are remarkably choreographed—particularly the ones showing sword fights between whirling dervishes on tabletops—which provide entertainment in themselves.

King’s Man has its appeal in the quality of the production and the actors, but the film sags from the writers’ not apparently having a clear vision of what they wanted to express.  When the fights seem to go on interminably, it seems like the director Matthew Vaughn has gotten distracted by the action and doesn’t realize he needs to move on.

Swashbuckling during the outbreak of WWI in a mix of tongue-in-cheek humor, serious aggression, and emotional upset .