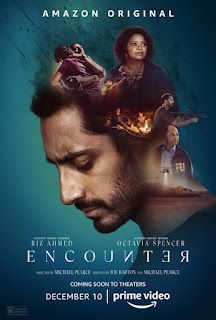 Viewers’ expectations are set up immediately by opening scenes of comets flashing across the sky and close-ups of microorganisms that look like aliens.  But then we’re introduced to a typical American family—mom, stepdad, and two young boys.  The older child Jay (Chauhan) shows resentment toward the “new” dad and sits at the dinner table drawing pictures for his own father Malik (Ahmed).  He’s had frequent correspondence with him, in which Malik indicates that he has an important job fighting for the country.  And it is true he has been in the Marines, but that is only part of the story.

It’s best not to know much more than that before seeing the movie because it is packed with ambiguities, tension, and fear.  Suffice it to say that the dad appears suddenly to take his boys on a road trip, which he calls a “secret mission.”  His imagination charms them and they look forward to a big adventure.

This is a well-conceived movie directed by Michael Pierce and co-writer Joe Barton.  It leads you along from the set-up to something much more frightening, in a way, and to something that will prompt your thinking about some relevant and important truths.  As you see it, you ask questions, consider hypotheses, and do a bit of nail-biting when the action gets hairy.  But afterwards, you ponder the fundamental ideas the filmmakers want you to think about.

The acting is superb; Riz Ahmed again proves his talent as he did in Sound of Metal playing a musician confronting deafness.  Here, he plays a devoted father—albeit one who lacks some parenting skills—whose intention is to rescue his children from an impending threat.  The young actors (Lucian-River Chauhan and Aditya Seaton) playing his children are also uncanny in their portrayals of real children put in threatening, sometimes traumatic, situations.  One is an eight-year old, the other a four-year old, and the scripting for them is outstanding in its accurate depiction of the way children those ages think.  It’s clear the two actors grasped what they needed to do, and they did it admirably with apparent precociousness.

Enter Octavia Spencer as the parole officer who lends common sense, genuineness, and perspicuity to all situations.  These are the attributes Spencer is so gifted in portraying, as seen in The Help, Hidden Figures,and The Shape of Water.  She shows that she is the only one in government who truly understands Malik, and appropriately asserts her presence in helping to resolve an incredibly tense situation.

This is a movie about so many important subjects—parenting, children, guns, mental health, and governmental approaches to enforcement.  It dramatizes all of these in a suspenseful high-tension script that engages your value system as you assess the drama.

Director and co-writer with Joe Barton, Michael Pearce has been recognized for his 2017 movie Beast, as a promising filmmaker.  He lends credence to that accolade in his portrayal of a family drama that informs about parenting, mental health, and law enforcement in a manner that is realistic and compassionate.

Encounter thrills and chills, but also makes you think about important considerations in looking at families and human behavior.