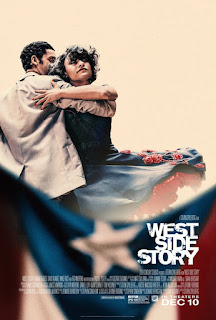 West Side Story (1961) is beloved among American cinephiles, but I was surprised that Steven Spielberg would pick it up for a 2021 remake.  It has been highly praised as a Broadway show and 1961 movie (Robert Wiseman, director), so a remake is rather puzzling.  Beyond that factor, with as much racial unrest and frank hatred going on in our country now, I have some doubts about a major film production—even though one I think is meant to make a statement about the inadvisability of violence—spending so much of the movie on machismo and racism before the “lesson” comes through at the very end.

Spielberg and his screenwriter Tony Kushner have kept the original story itself pretty much intact, except for some tweaking of the plot (e.g., inserting a clearly mixed gender character as opposed to a tomboy) and casting actors (except for Rachel Zegler) way beyond the teenage years.  I understand Spielberg was committed to cast Latin actors as much as possible for those roles, so perhaps he can be excused for not attending so well to the age factor.  But mismatching the ages of the actors and their characters is unnecessarily common in movies today, because age is so influential in defining who someone is; and beyond that, there are scores of talented young actors who could be in those roles.  Movies like West Side Story would be much more plausible to me if I looked up and saw teenagers; whereas, seeing late 20’s-30’s year-old actors behaving the same way seems a bit ludicrous.

Having stated what I see as drawbacks, I can say the production in terms of design (Adam Stockhausen), music (Leonard Bernstein, Stephen Sondheim), choreography (Jerome Robbins), and cinematography (Janusz Kaminski) are well done and entertaining.  The acting is laudable for the most part, especially Rachel Zegler as Maria and the iconic Rita Moreno as Valentina (of interest is that she was in both the Broadway show and the 1961 film production of West Side Story).  The quality of Ansel Elgort’s singing as Tony was a pleasant surprise to me, but, somehow, he seemed out of place.  It could be that he was miscast or perhaps the chemistry between him and Zegler didn’t quite come through.

Overall, the extended macho scenes in Spielberg’s 2021 West Side Story are so off-putting, by the end of the overly long movie (over 2½ hours) the viewer is eager to leave, which makes short shrift of the truly heart-rending scenes at the end.

West Side Story 2021 is nostalgic for those enamored of the 1961 version, but considering current tensions about race and immigration, it gives us a sense of its being dated.

Posted by donnarcopeland at 8:24 PM