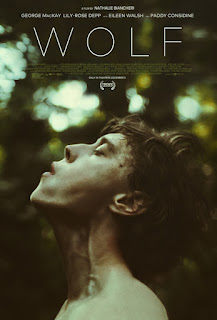 Wolf implies that “species identification disorder” is common, when in fact “species dysphoria” is a very rare condition.  I found this movie misleading and distasteful in so many ways.  First of all, the “hospital” staff treat the humans like animals, expecting them to become human, e.g., shaming them into compliance.  The filmmakers appear to know nothing about proven behavioral principles and therapy.  Progressive approximation is a common technique used by certified psychologists, whereas shame used by The Zookeeper (Considine) gets one nowhere or into something worse.  When the “patients” began to rebel at one point, my thought was that if you treat humans like animals, they will begin to show animalistic behavior.

That is also shown in individuals, such as Jacob (MacKay) who is demonstrably tender-hearted, but when The Zookeeper in particular treats him more and more like an animal, he becomes ferocious.

Jacob’s and the other residents’ parents have brought them for therapy, and have high hopes that they will get better.  But we don’t see any of them getting better, only worse, which shows the staffs’ techniques are wrong.  It may be that the filmmaker’s (writer/director Nathalie Biancheri) intention is to show the abuse and ill intentions for all to see, but there is no indication of that in the film.  Appropriate ways of treating people with mental disorders is never apparent.

In contrast with the staff, when Jacob and his new-found friend “Wildcat” (Depp) confide in one another, they become more human in their sympathy, empathy, and attitude toward their peers.  Mackay’s performance is noteworthy, especially when we see him moving in the forest; he must have studied the movement of wolves enough so that his form looks convincingly feral.

One comment made by an inmate suggests that the staff uses technology (like an iPad game) to connect them with their human side.  (Staff apparently don’t read today’s claims about technology possibly turning us into automatons.)  Other ludicrous interventions include a hopping dance with forced smiles (not emotionally based), shocks delivered to the abdomen, and placing disobedients gagged and chained into a cage.

There is nothing to redeem this psychological disaster of a movie.

Posted by donnarcopeland at 6:14 PM