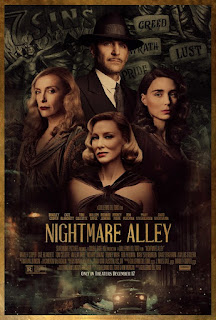 It’s a nightmare all right.  It starts out with arson by a shady-looking character, and we follow him as he wanders around and ends up at a circus, where he manages to get hired.  Stan Carlisle (Cooper) is smart and a bit of a charmer, and quickly makes friends with the showrunner (Dafoe) and the fortune teller Pete (Strathairn) and his roommate Zeena (Collette), a reader of Tarot cards.  When he learns fast from Pete and begins to offer tips on improving Molly’s (Mara) electrical act, it becomes clear that he has worked in the circus before, and that he doesn’t mind conning people.

But like all good sociopaths, he draws viewers into his web and we become fascinated with/question more and more of his actions.  Del Toro’s mastery in weaving stories that develop slowly across time, sustain glued-to-the-screen interest with spikes of anxiety and tension is clearly working in Nightmare Alley.  All the characters have potential to be a story unto themselves, but somehow Del Toro and his team integrate all of them into a coherent whole.  He co-wrote the screenplay with Kim Morgan and William Lindsay Graham who wrote the novel on which it is based.

The filmmakers make the most of their cast headed up by Bradley Cooper who embodies a corrupt phoenix that keeps rising after destruction.  Conning is his game, and it is only the goons [Molly’s protector Bruno (Perlman), a wealthy stooge’s bodyguard, and a psychologist] who recognize his threat.  This role could be a high mark in his career.  Cate Blanchett as a psychologist caught up in his web is icily intriguing as a gorgeous blonde fellow schemer, and as always cinches her role, which I will take issue with below (the role; not the actress).  Rooney Mara pulls off a rather naïve ingenue who eventually picks up on the straits she is in, in an entirely convincing way.  Toni Collette, David Strathairn, and Richard Jenkins are highlights in their portrayals of quirky characters who gradually become endearing in a strange way.

I found the production to be very entertaining and living up to the filmmakers’ reputation for making a good horror movie that gets into the psychology of human beings and all the myriad of characters that can and do emerge.  Speaking of psychology, I hope that viewers realize that the psychologist portrayed here committed any number of infractions that would revoke her license, let alone try her for crimes.  But as usual, filmmakers seldom consult with professionals in the profession they are portraying.  I got a chuckle out of Dr. Ritter’s sign:  Dr. Lilith Ritter, Psychologist, Ph.D.  It’s Dr. Ritter who earned the Ph.D., which should come with her name, not tacked on at the end.

Crafts I especially liked about Nightmare Alley are the production design by Tamara Deverell and the cinematography by Dan Laustsen.  Both contributed so much to the mood and subject of the film.

Posted by donnarcopeland at 10:56 PM