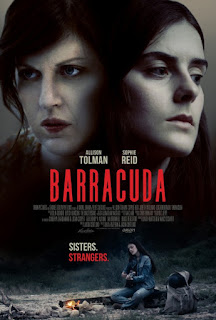 From the side, barracudas appear to be finely formed, sleek, and silvery.  Take a frontal perspective, however, and you see a cavernous mouth with fang-like teeth of different sizes.  Barracudas are considered to be ferocious, competitive predators who use surprise and short bursts of speed to catch their prey.  Keep these images in mind as you see this picture with its apt title.
Merle (Tolman) lives in Austin, Texas, and has inherited a ranch in nearby Fredericksburg, where she goes to relax with her fiancé, Raul (Bordonada), his son, and sometimes her mother, Patricia (Williams).  She works at a children’s museum for a demanding boss, and while things are not perfect, she seems reasonably happy, albeit lacking in confidence and not likely to stand up for herself.  She clearly has unexpressed feelings, especially toward her mother, but seems to want to maintain a veneer of pleasantness around herself.
Merle’s father, despite a number of personal faults, was a successful country musician with a band that traveled internationally, but he passed away a number of years back.  When a young British woman pops up at her door one day, Merle expresses surprise when Sinaloa (Reid) claims that they share a father.  Raul, who lives with Merle, believes her straightaway and wants to welcome her as a relative to their home, despite Merle’s reluctance.  This is an example of how Merle easily gives in without expressing her misgivings.
Sinaloa is an interesting character who continually surprises with her talents and her swift actions.  She has no trouble standing up to people or offering them advice, but she is helpful and Merle enjoys her company.  She has a beautiful voice as she accompanies herself on one of Wayne’s old guitars, which Merle had on hand.  (Sinaloa’s had been stolen while she was on the road.)  As often happens in these situations, over time Sinaloa’s presence becomes irritating and stressful for the family, and they feel that something must be done.
As writer and co-director with Julia Halperin, Jason Cortlund has woven a thriller with suspense that builds from intent curiosity to increasing dread.  Sinaloa’s character reminds me of femme fatales like Alex (Glenn Close) in Fatal Attraction and Amy (Rosamund Pike) in Gone Girl, complex women with a troubled past.  We the audience might see telltale warning signs, but the other characters in the stories inevitably get drawn into their webs.  Even though we might sense or recognize these signs, the character is so fascinating and unfathomable in her urges and plans, we stay with her.
Sophie Reid fits into this role like a snug mitten; her character is attractive and engaging, with many appealing traits.  She can be playful and fun.  She shares just enough about her past to manipulate the listener into emotions she wants them to have, particularly sympathy and empathy for her.  But she can turn on a dime or just disappear in a second.  Allison Tolman’s character is a great foil for her, being willingly drawn into her wiles, but ultimately using her good judgment.  Tolman is particularly good at showing the subtle transformations of her character’s feelings toward Sinaloa, while maintaining the basic trust she generally shows toward others.
Two ways the film offsets the seamier sides of its story are by infusing playful times swimming in the lake and the music.  The score by Chris Brokaw, Sinaloa’s songs, and the family band at the ranch consisting of Texas musicians Colin Gilmore, Butch Hancock, Bob Livingston, and Richard Bowden, with additional contributions by Austin’s The Mastersons are pleasing to the ear and complement the story.

What happens when a British woman appears on an Austin, TX, doorstep, claiming she is also the daughter of the resident’s country singer father.