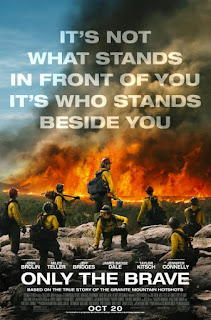 Only the Brave tells the story of the Granite Mountain Hotshots from Prescott, Arizona, a scrappy group of fighters who have to overcome city politics to become certified as official firefighters.  Their supervisor (“Supe”) Eric Marsh (Brolin) has been trying for years to be able to use his skills and talent with authority.  His mentor Duane (Bridges) coaches him on political maneuvers, and sure enough he is given a chance to have his team evaluated for certification.  He does need to hire a couple more men, and decides that even though Brendan (Teller) has a drug and felony history, his wish to parent his newborn child and give her the father he never had as a child convinces Eric to give him a chance.
Brendan will undergo an initiation into this special “fire fighting fraternity”, which will test his loyalty and endurance, and we will see whether he makes it or not.  It’s a challenge because of his history and the fact that his ex-girlfriend is pregnant.
We will witness a number of fires (spectacularly filmed by Claude Miranda), learning a bit about the science and technology of fighting them.  But to its credit, Director Joseph Kosinski and his writers Ken Nolan and Eric Warren Singer go behind the fire scenes and show us what the personal lives of these fighters is like.  Brendan’s challenges are made more poignant by his being away from home so long his infant daughter doesn’t want to have anything to do with him, which makes him question his occupation, even though it has been rehabilitating.  Another character has to make a decision about staying with his passion for fighting fires and taking on the responsibility of having a child.  These real-life issues give spark and life to the film, balancing the emphasis on the technology of fire-fighting with moving human stories.
A minor drawback of the film is that it isn’t always obvious why certain tactics are taken, and I ended up questioning whether the pilots in the planes spraying fire repellant work at all with the fighters on the ground, who get sprayed from time to time.  Dialog was difficult to decipher sometimes as well.  On another positive note, the music by Joseph Trapanese is truly fine.

This dramatization of a real group of firefighters is most interesting—especially since fires in the west are a topic of conversation now in the U.S.—as well as exciting and touching.