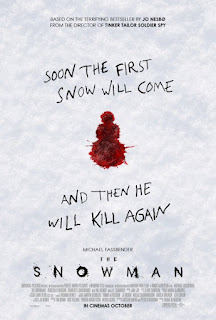 The best thing this film does is illustrate how important good direction is to movies, because this seems to be the main flaw in The Snowman.  No matter how fine the actors are (e.g., Fassbender, Gainsbourg, Simmons, Ferguson) nor how artistic the cinematography (Dion Beebe), editing (Thelma Schoonmaker), and writing (Peter Straughan, Hossein Amini), a film can still be so deficient in the key function of directing (Tomas Alfredson), the other arts simply cannot make up for it.  It’s puzzling in this case, because Alfredson has had two successes in English language films (Tinker, Tailor, Soldier, Spy and Let the Right One In), and it’s surprising that he had such a lapse in this case.  He has responded to criticisms by explaining that when they got the go-ahead to begin filming, they did not have enough time to shoot all the scenes in the script, and when they started editing, this was all too apparent.  This helps explain some of the gaps, but doesn’t account for the lack of coherence or the apparently significant departure from the successful novel on which the story was based (by Jo Nesbo).
This partially explains why there are so many scenes, especially in the beginning, where one has no idea who the characters are or, later, how they fit in with the story.  At any rate, it’s difficult for the viewer to piece together the sequence of events.  Part of the problem is that extraneous scenes are included, serving only to confuse, such as the scenes where Fassbender’s character Harry Hole is stone drunk.  This has nothing to do with what transpires; later another detective has the same problem, but we are not told how they are related to one another.
As much as I could glean, the story is about a series of murders across many years in which a snowman appears just before the murder of a mother with a young child.  Hole, the leader of the crime squad, and Katrina (Ferguson), his assistant, are charged with finding the serial killer.  There are a number of false leads, and when we learn who the killer actually is and what happens to him, it lacks the “Oh, I see” moment of a good detective story when the reader/viewer realizes there were clues that he/she missed.  In this film, there appear to be few if any logical connections with which to give the plot coherence.
I don’t recall a time when a film that has this much potential falters so badly.

Sadly, The Snowman is not worth the price of a ticket to see it.

Posted by donnarcopeland at 11:23 AM