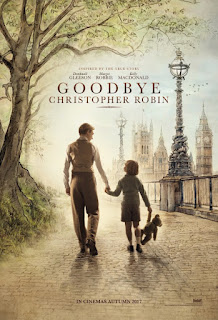 This film is enchanting in the depiction of a father and son suddenly left on their own forging a bond through imaginative play.  This is the best part of the story that would eventually become the beloved Winnie-the-Pooh stories for children.  But the film covers more troubling times, such as A. A. Milne’s military service in WWI, which left him with what sounds like our current understanding of PTSD, his beautiful wife Daphne who bore a son “who almost killed me” out of a sense of duty and was drawn toward London society, and their son, Christopher “Billy” Moon, whose imagination helped his father with his mental turmoil and provided inspiration for the Winnie-the-Pooh stories, but became a publicity-fueled nightmare.
We’re introduced to Alan Milne (Gleeson) and his wife Daphne (Robbie) at a ball where he is obviously uncomfortable (having just returned from military service), but is easily cheered/charmed by his lovely wife.  When she gets pregnant soon after and gives birth to a boy (much to her disappointment, since she figures he will go to war eventually), a nanny (Macdonald) is engaged to take care of him.  She is essential, since the Milnes are away from home frequently in the evening and traveling.  Christopher (Tilston) comes to love “Nu” as much as his parents, but when she must leave for a time to attend to her ailing mother and Daphne feels compelled to leave their country home for London city life, the awkward father and precocious son are left to their own devices.
It turns out that Christopher is just what the frustrated, war-scarred writer needs to get past his writing block (he is writing a book against war) and become productive.  The child seems to understand intuitively what is bothering his father, and talks about it in a way that will help Milne redefine his hallucinations into something nonthreatening.  Milne does eventually write and publish the book Peace with Honour, but before that, he turns the fantasies that he and his son weave together on their walks in the woods into a children’s book that goes all over the world.
The rest of the story illustrates the all-too-frequent perils of publicity on children and families.  When the book becomes famous, the Milnes are naïve in setting no limits on campaigns and interviews involving Christopher, even when the knowledgeable nanny tries to enlighten them.  They will only “get it” when their son becomes so resentful and alienated from them, he enlists in the armed services, and they fear they have lost him forever.
The writers Frank Cottrell Boyce and Simon Vaughan and director Simon Curtis have produced what I think is a story for our current times.  We have witnessed countless young people who have been compromised by the adulation of the public, which can literally swallow up an unprotected, unsuspecting celebrity.  Some survive to go on, but some don’t.
But as valuable as this segment is, it is only a small portion of the film; the first part is entirely enchanting, with the three main actors being a joy to watch.  Gleeson is top-notch in every role he plays (my personal favorite is in Ex Machina), and it’s only a matter of time before he receives major awards.  Here, he is the sensitive artist who has some difficulty navigating the real world, but is a wizard in creative endeavors.  Margot Robbie was perfect casting for a woman who is beautiful and engaging, but more suited to promotional endeavors than motherhood.  (The evidence of her versatility is in her role as Ann Burden in Z is for Zachariah.)  Young Christopher Robin is played by Will Tilston, who is captivating with his dimples, but shows considerable acting talent when he is required to be fanciful, loving, desperate, and demanding.  The switch in actors to Alex Lawther is unfortunate in its lack of continuity; he looks and acts completely different from the earlier character.
Carter Burwell’s music entertains and supports the story in its different periods of time, and David Roger’s production design carries the viewer right into early 20th Century homes and cities.

For an enchanting, nostalgic evening with contemporary issues to ponder, this film will serve you well.

Posted by donnarcopeland at 2:43 PM