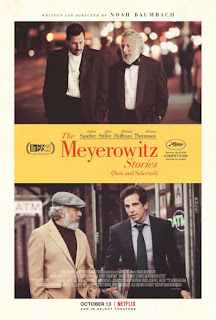 If you want to see a dysfunctional family in action, see the Meyerowitz Stories on Netflix.  Much—especially in the beginning—is painful to watch and listen to, but as time goes on, and genuine caring and concern are mixed in with the rancor and bickering, it finally gets to laugh-out-loud funny.  Noah Baumbach, writer/director knows much of what he speaks in terms of the psychology of family interactions.  It’s dramatized, of course, and there are some scenes I wish he had toned down a bit to make the film more tolerable and plausible, but for the most part it’s a rich store of family dynamics.  Sibling rivalry and its sources (absence of parents, favoritism of parents), the neediness of people who have grown up missing nurturance and acceptance they craved as children, and the effects of divorce and remarriage on children and spouses live on in people’s adult lives—as clearly demonstrated by the film.
Harold Meyerowitz (Hoffman), the patriarch of this clan, is obsessed with his art to the exclusion of almost everything else.  He seems to have been a successful teacher, but the value of his art productions is not clear.  Harold’s obsession with his art and his place in the art world extends to his interest in his favorite son Matthew (Stiller), whom he sees as being a contributor to his art, despite the fact that his son Danny (Sandler) used to be a musician and in adulthood has been much more involved in his father’s life.  His daughter Jean (Marvel) represents the child almost completely forgotten by everyone, except she has managed to maintain a texting relationship with Matthew and Danny’s daughter Eliza (van Patten).
There are hit and miss visits among family members, none of which appear to be satisfying to anyone, then Harold becomes seriously ill, which serves as a catalyst in bringing out more pointed and emotionally productive encounters.  These inform us—and them—about the sources of their various discomforts and resentments and significant events they have endured, giving us a good picture of how the family members came to be who they are today.
Baumbach’s direction is solid, and Randy Newman’s music and piano accompaniment throughout give a lilt to the drama and comedy onscreen.  Similarly, Robbie Ryan’s cinematography highlights, focuses, and shifts with the action, giving us the sense of being inside the picture observing a real family.
Both Adam Sandler and Ben Stiller are a question marks for me before I see one of their movies.  Adam was great in his work on “Saturday Night Live” and in Spanglish, but That’s My Boy, Big Daddy, and The Waterboy are insipid and show none of his acting skills.  Similarly, Ben Stiller has been exemplary in Brad’s Status and The Secret Life of Walter Mitty, after bombs Zoolander 2 and Along Came Polly.  Here, with the good script and the direction of Baumbach, they are at their best, and supported by a number of good actors (Hoffman, Thompson, van Patten, and Marvel, with cameos by Bergen, Miller, and Driver).

Picture of a dysfunctional family that comes together (mostly) during the patriarch’s life-threatening illness.

Posted by donnarcopeland at 10:33 AM