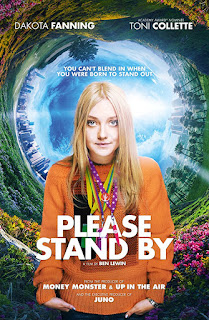 First of all, it helps to be reminded of what the title of this film means.  A common term in media productions, it refers to a problem that is being fixed.  And it’s a perfect mantra to calm young Wendy (Fanning) down, a teenager with autism who, astonishingly, is writing a Star Trek screenplay.  She is well versed in what the term means, and her primary caretaker, Scottie, has picked up on that and wisely incorporates it as a calming technique in her therapy.  Wendy has advanced so far in managing her symptoms, she has actually written 400+ pages, with the aim of entering a contest announced on TV in which she could win $100,000.


The problem is, of course, that no one really takes her seriously, and Scottie has never been a Star Trek fan.  However, she has made it clear that she is serious about entering the contest, has worked diligently to finish her script, typed it in the proper format, and fully intends to submit it to Paramount Pictures by the deadline.  She’s gifted like some autistic persons in savant-like knowledge—in this case of Star Trek—as demonstrated in a comical scene in which skeptics devise questions about Star Trek they are sure she can’t answer, until after she wins a fair amount of money off them.
Wendy has had top-notch training at Scottie’s facility on how to navigate the real world, memorizing rules (such as crossing a busy street only when it shows the icon for it), and making detailed notes for herself in a notepad suspended on a string around her neck.  She has been trained well enough to hold a job at Cinnabon, even advancing from a greeter to icing duties.  She knows about how to count money and shop in stores.
Then a crisis happens, associated with a visit from her sister Audrey (Eve), which blows up when no one seems to understand the importance of mailing in the script that very day, and she learns she will not be going home with Eve and taking on the role of an aunt to her newborn niece.  She has a tantrum, Audrey leaves, and Wendy refuses to adhere to her normal routine.  But her mind is working during the night, and she resolves to take the manuscript herself to Los Angeles, slipping out of the building at dawn.
Now, the excitement and suspense builds, as we see Wendy go through all kinds of obstacles in reaching her goal.  It’s not clear at all whether she will make it.  Unfortunately, the film lapses into implausibility at times, although it is not enough to seriously affect the viewer’s enjoyment of the film.  One example I’m talking about is the scene where an elder care employee rescues her from a con, and then offers to have the retirement facility van take her to Los Angeles driven by a very old driver, which doesn’t turn out so well.  Another is Wendy being able to navigate a number of situations involving skilled problem solving that an autistic person would likely not be able to master.  Still another is that when police bulletins are sent out they cannot locate her, and don’t even bother to check with bus stations along the way.
As a whole, though, this is a delightful film with entertainment, suspense, and warmly humorous encounters, and the accompanying music (Heitor Pereira) enhances whatever mood is being portrayed.  Dakota Fanning is convincing as an autistic person, and pulls in the viewer’s empathy and admiration for her right away.  Toni Collette is consistently good, as she is here.  Patton Oswalt’s cameo at the end is priceless.

An engaging film with a view of autism rarely seen in dramatic works.