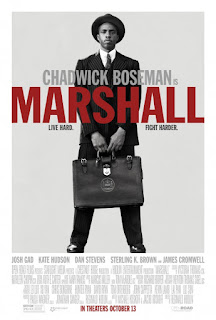 It’s usually inspiring to hear about how someone has achieved greatness, especially when the odds are stacked against the person.  This dramatized account of Thurgood Marshall’s journey toward sitting on the U.S. Supreme Court is just such a story.  Starring Chadwick Boseman as Marshall, it starts when he is a lawyer for the NAACP sent to Bridgeport, Connecticut, to defend a black man accused of raping a wealthy white woman.  Right off the bat, the judge (Cromwell) rules against his serving openly as the defense because, he is licensed in Maryland but not in Connecticut.  His colleague Sam Friedman (Gad) has obtained some kind of allowance for him, but the judge refuses to honor it, saying he can sit in on the trial, but he is not to speak.  This means that Friedman—reluctant to participate at all because criminal law is outside his practice—must take the lead, with coaching from Marshall.
The film is something of a thriller in its focus on a trial with conflicting accounts, misleading information, the back and forth questioning and arguments of prosecution and defense, the protests in the community that condemn the prisoner Spell (Brown) from the outset and threaten Marshall, a black, and Friedman, a Jew.  The most dramatic scenes are between Marshall and Spell and later on the testimony and questioning of the victim (Hudson).
This case, based on the real one, The State of Connecticut v. Joseph Spell, illustrated that prejudice and discrimination against blacks in the north was very similar to that in the South, and Marshall realized that the NAACP needed to shift its focus to civil rights in the north:  “We will have to spend more money on regular defense cases because these [cases for] teachers’ salaries…and university cases [which constituted their case loads at the time] will not continue to keep our name going”, he told his NAACP adviser (Daniel J. Sharfstein, 2005, “Saving the Race”, legal affairs).
Boseman is very at-home with the character he plays, who can be cheeky, quick with the comeback, quietly reasoning, witty, or seething with anger.  He and Gad are very much in sync, despite their characters’ very different personalities.  Sterling K. Brown doesn’t see much action until he is actually on the stand, when he gives a fine performance.  Dan Stevens, James Cromwell, and Kate Hudson make a fine supporting cast.
Director Reginald Hudlin’s work has been primarily as director and producer in television, but he does a good job with this film in adhering fairly closely to the original story and maintaining good pace and focus.  Cinematographer Newton Thomas Sigel is skillful in transitioning between indoor and outdoor scenes and sustaining a sense of mystery with lighting and close-ups of faces during testimony.

A significant case for NAACP Attorney Thurgood Marshall in his ascent to the U. S. Supreme Court.

Posted by donnarcopeland at 1:19 PM