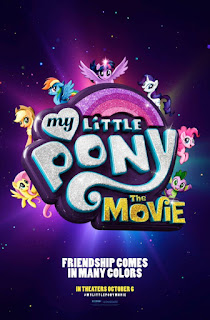 This frothy confection using a kaleidoscope of pastels is made for little girls who cherish dolls, animals, sugar and spice and everything nice.  Fortunately, it also conveys messages about friendship (“Friendship is magic”), teamwork, loyalty, creativity, forgiveness, and a sense of responsibility for those in one’s charge.  It has bold adventure, excitement, and near-escapes to balance out the sweetness and light.
It begins with all-too-true (for females) dithering by the main character Twilight (Strong), the friendship princess, about whether she will be good enough to lead the Festival of Friendship and convince her fellow princesses to exert their magic on the elements to create a successful party.  They look like they might come around, but suddenly the Storm King (Shreiber) and his commander Tempest (Blunt) burst in with the intent of stealing the magic of Ponyville where the princesses and their people reside.
Twilight steps up to the plate, vowing it will never happen, and recruits her friends to look for support from Queen Novo of the Hippogriffs (Adaba).  Along the way, they will encounter a smooth-talking cat, Capper (Diggs), Captain Celaeno (Saldana) and her pack of erstwhile pirates forced to abandon their adventures and serve the Storm King, and finally, Queen Novo’s lonely, brave daughter Princess Skystar (Chenoweth).  They narrowly escape being sold and must continue to flee, with Tempest and the Storm King in hot pursuit.
My Little Pony was originally a television series, “My Little Pony:  Friendship is Magic.”  The 2017 film, directed by Jayson Thiessen, with screenplay co-written by Meghan McCarthy, Joe Ballarni, Rita Hsiao, Michael Vogel, and Lauren Faust, is based on an original story by Bonnie Zacherle.  Its appeal is almost guaranteed for young girls, and may still be favorably received by older people who can appreciate its solid messages.  The coloring and animations are first-rate, and the music and songs by Daniel Ingram, Sia, the Lukas Graham Band, DNCE, and CL are lyrical and moving.
I appreciated this film for its appeal to girls, with its messages about basic values of confidence, fortitude, adventure, and comedy that will stand them in good stead, whatever age they live in.

Young girls can dream of greater and greater accomplishments.

Posted by donnarcopeland at 8:50 PM