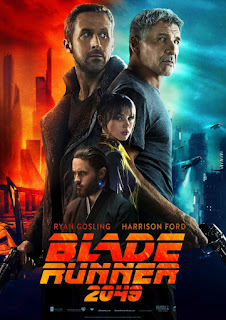 The cinematography (Roger Deakins), special effects and other-world atmosphere (production design by Dennis Gassner) give this film’s story the mystery and spookiness it deserves.  The 1982 Blade Runner film, based on Philip K. Dick’s graphic novel, has been updated by screenwriters Hampton Fancher (who also worked on the earlier film) and Michael Green under the excellent direction of Denis Villeneuve.  It’s fast-moving and suspenseful, leading the viewer down garden paths that make it seem predictable, but ultimately is not.
‘K’ (Gosling) is a blade runner charged by his supervisor Lt. Joshi (Wright) to track down out-moded replicants made by the Tyrell Corporation and retire them.  The new ones, manufactured by Niander Wallace (Leto), who bought the Tyrell Corporation, are considered to be so human-like a special test has been devised to distinguish between replicant and human.  ‘K’ must be tested each time he returns to base to be sure that he has not been tampered with.
Something comes up in one of his investigations that arouses his curiosity, and he begins to pursue it, against the orders of Joshi.  This search constitutes the main part of the story with all its complexity, assortment of figures, and dangerous encounters.  He does eventually find Deckard (Ford), the original Blade Runner, who has become a recluse, and who is not very happy to see him, but K has burning questions Deckard can answer—or so he thinks.
The picture of the future that Blade Runner 2049 constructs is alarming as well as fascinating.  Identities merge and transform with ease, paranoia about who is who is rampant, sophisticated space ships for rapid travel seem to appear out of nowhere any time, and most of the buildings look like tool shops inside.  Digitized figures (many especially in the form of sexy women) tower over the city, which is teeming with multitudes.  At one point, a character says, “We’re all just looking out for something real”, which is like the viewer’s experience throughout the story.
2049 continues with the existential questions of the first Blade Runner, having a lot to do with issues about what it means to be human.  Yet, although it is enlightening to be familiar with the previous film, 2049 stands on its own; it’s not necessary to have seen the first film to grasp the import of the current rendition.

With robotics in our near future, it behooves us to consider what it is to be human.

Posted by donnarcopeland at 8:22 PM