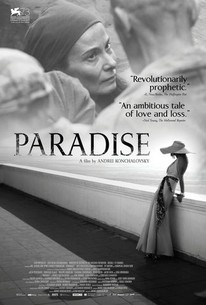 Paradise comes from a different perspective on the ending of WWII in Germany, one in which previous leaders and a prisoner reflect on what happened from their viewpoints, why they made the decisions they did, and their regrets.  Olga (Vysotskaya) is a Russian noblewoman who joined the French Resistance and got arrested for sheltering Jewish children by Jules (Kurth), a French-Nazi collaborator with the occupying Nazis in Paris in 1942; and Helmut, a German nobleman who bought into the Nazi vision of Germany being a paradise with Aryans in charge.
The movie depicts how these three people’s paths cross—and sometimes re-cross—in unexpected ways.  Olga and Helmut first meet at the seaside and again later at a festive occasion when she is married to a Jew.  They have a tryst, and he falls for her immediately, but she rebuffs him and doesn’t answer his letters.
Olga, who does not have children of her own and is part of the Resistance, ends up being interrogated by Jules after she is arrested because of her Jewish last name.  The film gives many examples of how people desperate for freedom will make desperate bargains with their captors, some for noble reasons, some for not so noble reasons.  Irrespective of Jules, Olga ends up being sent to a concentration camp, where Helmut, her admirer of years before, is now the Fuhrer’s representative sent to uncover corruption in the camps—not only perpetrated by the prisoners, but by those in charge as well.  Mostly by those in charge.
Helmut spots Olga just by the crook of her neck when he is on inspection, and is entranced by her just as before.  He then requests that she become his cleaning lady, which she does and a romance is lit.
This is one of the places where the film has value in showing the power of basic beliefs about life, and the ambivalence that arises when people are faced with situations that challenge those basic beliefs.  Helmut, who appears to be convinced that the Nazi principles are ideal, is flummoxed when he encounters their real-life effects.  His underlying beliefs are contradictory to some of his actions, and he remains in a dilemma.  Olga is shown to be noble throughout in her basic principles of love for humanity and a kind of practical view of what is best.  Jules acknowledges his mistakes, but still shows weakness and a willingness to give in to immediate gratification.  He misses the overall picture altogether.
The biggest drawback of the film is its constant cutting from one interview and time to another, which makes it difficult to maintain a logical chronology.  This is a popular technique with filmmakers, used so many times without any reason for it.  In Paradise, when we first encounter the main characters it is not clear at all who they are and how they will fit into a story, introducing unnecessary confusion for the viewer.  Moreover, a better film title needs to be chosen; both the original “Ray” and the current “Paradise” are misleading.
I liked the perspective Director Andrey Konchalovskiy took in presenting a view of WWII that is different from most films about the subject.  He is psychologically attuned to human motivations that are not unitary, resulting in ambivalence, and surprising turns in human decision-making.  He is in sync with cinematographer Aleksander Simonov and musician Sergey Shustriskiy in delivering a sometimes stark but very descriptive picture of humans under the stress of war.

A picture about dreams of a paradise that never comes to be, which creates horror on its way to would-be glory.