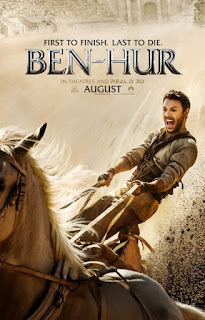 This story of Ben-Hur is derived from the 1880 novel by Lew Wallace entitled Ben-Hur:  A Tale of the Christ, with a screenplay by Keith R. Clarke and John Ridley, who also wrote the screenplay for 12 Years a Slave.  In this film version, the plot diverges here and there from the novel.   Previous films based on the book were made in 1907, 1925, 1959, and 2003, the most famous of which was William Wyler’s in 1959 starring Charlton Heston and Stephen Boyd, which won 11 Academy Awards and became the top grossing picture of 1960.
In 2016 Ben-Hur, Judah (Huston) and Messala (Kebbell) are brothers, Messala being rescued by the Ben-Hur family when he became an orphan.  This sets up an intense bonding/rivalry between the two, the latter fueled by the mother’s antagonism toward Messala, and her efforts to place a wedge in the obvious attraction between Messala and her daughter.  Embittered and feeling justified in his actions, Messala accuses Judah of treason against the empire and betrays the family who sheltered him.
Like a coming-of-age hero who must undergo numerous trials, Judah is arrested by the Roman soldiers (he wasn’t guilty and tried to protect the zealot he had rescued who betrayed him), put in a Roman ship’s galley to row for five years, manages to escape during a battle at sea, and is washed ashore near the camp of a wealthy African sheik (Freeman). After saving the sheik’s sick and dying horse, the sheik sponsors Judah’s entry into the chariot race of his life with Messala being his primary competitor.  Messala has now become an important Roman officer in the army.
Huston and Kebbell show their acting skills in achieving a detectable ambivalence toward one another that comes through as a deep, complex relationship.  Judah is the more secure and insightful brother who was born naturally into a noble family, whereas Messala has stored up years of resentment at their social inequality, despite Judah’s assurances that he is truly a member of the Ben-Hur family.  Messala has coped with his situation by joining the Romans in their brutal campaign to crush uprisings that seem to be proliferating in conquered dominions.  Morgan Freeman as the sheik has the same gravitas that he brings to all his roles.  The actresses are beautiful, but are primarily ornaments without much of a role, except maybe Esther (Boniadi), who is paired with Judah and asserts herself easily when she thinks Judah is not listening to her.
The story of Ben-Hur is well told with OK special effects, but I see no need for the 3-D version.  For those who are sympathetic to the Christian religion, it is likely to be inspiring as well as entertaining.