KUBO AND THE TWO STRINGS 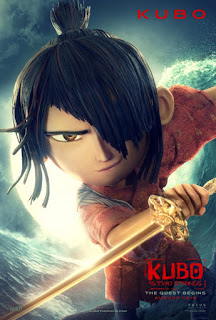 What a perfect blend of visual beauty, creativity, magical stories, and delightful lessons for life!  The American stop-motion animation studio Laika is well known for its quality work (Coraline, ParaNorman, The Boxtrolls), and Kubo and the two Strings represents their best in my opinion.  The visual beauty lies mostly in the sheets of paper that float or spin around and then are instantly formed by origami into magical figures.  But they are not just magical, their identities are revealed in time, and provide a way for a young child to come to terms with the loss of his parents.  The stop-motion animation could be entertaining and appreciated even without the drama, but that’s the icing on the cake.
The film opens with an undulating sea and a tiny figure in a boat saying mantras to herself to keep her boat on course.  She ends up being tossed on shore and asleep or unconscious.  A baby’s cry awakens her and she runs over to find her infant son wrapped in a blanket.  He has a patch over his left eye.  The full story about them and how they got there unfolds during the course of the film, but in the interim, we see mother and son residing in a remote cave carved in a huge rock formation.  The mother appears older and frail, and her devoted son, Kubo (Parkinson), feeds her and comforts her when she has nightmares.  She tells him wonderful stories, his favorites being about his father.  He has many questions about him, but is always left hanging when his mother forgets.
During the day, Kubo runs down to the village and tells the same stories in the city square which are illustrated with his magical papers and origami figures.  Plain sheets of colored paper are magically transformed into figures as he relates a tale.  Now, Kubo has been warned many times by his mother not to stay out after dark, but when he hears that during a certain festival people light lanterns and talk to their departed loved ones in the cemetery, he makes his own lantern and tries to talk to his father, not noticing that the sun has set and it’s dark.
From there, the story becomes an adventure in which Kubo is visited by his ferocious aunts (Mara), witchlike figures out to capture him; thrown with a monkey (Theron), a beetle (McConaughey), and his origami action figures and their weapons, all while being actively pursued.  There are close calls, harrowing battles on land and sea, and a quest.  Kubo eventually learns who the witches are, why he has only one eye, and the full story about his parents.  In the process, it becomes a hero’s journey toward enlightenment and manhood.
Themes include the value of stories, magic, family, and overcoming evil, mixed in with plenty of humor and adventure.  The interchanges between the monkey and the beetle are wonderfully entertaining in the midst of real threats.  Of deeper import are the observations about death and how memory (the “most powerful magic there is”) in the form of stories keeps loved ones alive forever.  And finally, there is a poignant sequence where an evil man is transformed by making him forget his meanness and defining him as someone charitable and good, giving credence to the idea that the attributions of others influence who we are.
In addition to the wonders of Laika and Travis Knight’s animation, the voices of Theron, Parkinson, Fiennes, Takei, Mara, McConnaughey, and the Japanese actors provide additional color and meaning to the story.

Animation and story at their best, a film for all ages.

Posted by donnarcopeland at 10:00 AM