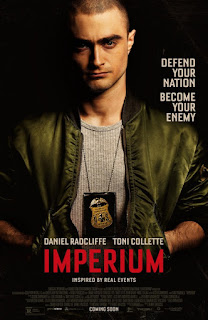 Daniel Radcliffe plays an uncover FBI agent, Nate Foster, whose charge is to mingle with neo-Nazis and gain their trust.  His supervisor Angela (Collette) is certain that they are planning a major event that will risk the lives of many people.  She thinks the Harvard educated, ex-Marine, and personable new person in the department would make an excellent choice for the job.  Her boss, Tom Hernandez, who doubts her judgment in this case, frequently makes disparaging remarks about her, and thinks Nate is not ready for such a job, so he initially nixes the operation.  But with pressure, Angela gets her way and Nate embarks on a dangerous mission.
The men comprising the Skinheads make a motley crew, with different shadings to their beliefs and prejudices.  Some are fundamental Christians, some are simply angry at the world, and some have more of an intellectual reason for joining the movement.  One is a hothead who Nate thinks it’s only a matter of time before he is arrested.  They’re all united in their belief, however, that “diversity” equals white genocide and that the white race deserves supremacy.  (They’re obviously unaware that race cannot be biologically defined.)  I found it enlightening to get a picture of what these people are like and the differing motives they have for joining the group.
It’s also interesting to see how the FBI creates an uncover sting in and what the experience of being such an agent is like.  He has to be convincing in feigning beliefs he doesn’t hold, possess special knowledge so he appears as smart as or smarter than the others, be likeable to most of them, and be quick to change the script in a flash if something is about to go wrong.  Radcliffe achieves this persona, and the script is snappy enough to maintain the action.  Writer/director Daniel Ragussis has successfully adapted the true story on which the film is based to the screen.  That story with the same title was written by Michael German.
Toni Collette, Tracy Letts, Sam Trammell, and Pawel Szajda provide excellent supporting roles in helping to make Imperium an interesting, exciting, and sometimes disturbing thriller.  It will be in limited release as well as VOD August 19, 2016.

Go to Imperium to be thrilled and chilled.

Posted by donnarcopeland at 4:06 PM