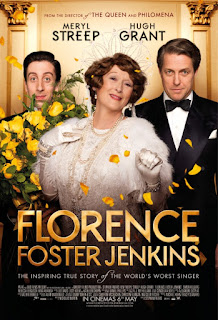 Stephen Frears has created a farce about a woman who is tone-deaf, but imagines she can sing beautifully—something someone might see on television’s “The Voice”, actually.  But the difference here is that thousands are taking part in her delusion in a folie à deux-mille.  Granted, at one concert it requires a brassy woman from Brooklyn to whistle at everyone who’s laughing, and make them shush and listen with respect.  This is one of the finest moments in the movie when she makes clear what the film is about:  That matching Florence’s own generosity and warm-heartedness should be returned in full.  This film is based on a true story in which a wealthy woman insists on giving concerts when she has no talent.  But she was surrounded by her people—some who were sycophants and some who genuinely cared for her—and we’re told at the end of the film that the recordings made by Foster Jenkins are some of the most requested from the Carnegie Hall Archives.  So the woman’s popularity is not made up.  I think this is the only instance in movies I’ve seen that generosity and warm-heartedness trumps critical opinion and analysis.  (Bravo! Florence Foster Jenkins!)
For someone who can really sing, pulling off an off-key performance must be extremely difficult, but of course the ever-talented Meryl Streep has no problem.  As Florence, she screeches, whinnies, and groans like the worst of them (bad singers)—all with an earnest face and magnanimous heart.  I understand from one of her interviews that she actually had to learn to sing the arias the right way before she began to sing them purposefully off key.  She and Hugh Grant make a loving pair in a union with perhaps the same level of denial that is shown toward her voice:  Of course, it’s perfect!  They play the two characters like the old pros they are.
Almost as much of a star in this film as Streep is Simon Helberg, who plays the role of pianist for Foster Jenkins.  His facial expressions are something to behold, from the time he first hears Florence sing to the end when disbelief and feeling aghast evolves into surrender and love.  We laugh at his horror about as much as we laugh at Streep’s voice.
Earlier this year, I saw another rendition of the Florence Foster Jenkins story (Marguerite, a French-Czech-Belgium production directed by Xavier Giannoli and starring Catherine Frot.)  Frears has clearly gone for more of a comedic touch—a hearty laugh compared with Giannoli’s smile.  I like both treatments—they make for interesting contrasts—but in both I wearied of listening to the grating sounds that come from the actress’s voices.  Is there anything worse than bad singing of operatic arias?

Allow yourself to be drawn into a delusion.

Posted by donnarcopeland at 3:13 PM