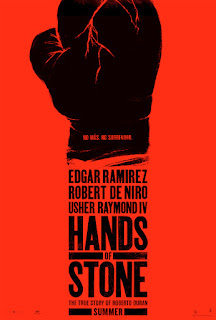 Roberto Duran (Ramirez) grew up in Panama, a street kid, who learned early on how to hustle, coached by a neighborhood “Pied Piper” who gathered up the kids and taught them how to survive by hook or by crook.  Duran’s father had long left his mother, and this man, Chaflan (Jaenada), served as his first father figure.  The second was Carlos (Blades), whom Duran at an early age kept bugging to train him to be a fighter, and when Carlos actually saw his drive and determinism in an underground fight, he agreed.  The third—who served as devoted mentor as well—was Ray Arcel (De Niro), who was approached by Carlos to pick up Duran’s training because he recognized that the famed trainer would make Duran a champion prizefighter.  Both Carlos and Ray sustained their involvement in Duran’s career for years despite major setbacks.  This could be the underlying substance of this biopic—the search for a missing father and how that served to fuel a man’s aggression and then channel it into something useful.
Another influence was Panamanian politics, that country’s efforts to regain their sovereignty after the U.S. “bought them” with a canal.  Duran was a perceptive child when the protests first began, and when he witnessed the killing of a Panamanian trying to raise Panama’s flag at the Panama Canal and the Panamanians’ perception that the U.S. had reneged on a deal, the U.S. was identified as the father who abandoned him in infancy.
Ray Arcel was reluctant to take on Duran—he had been punished by the boxing powers that be at the time—but partly because he saw the potential and partly because he just wasn’t ready to retire, he began a relationship with Duran that affected both of them emotionally and changed their lives.  Duran soon became the boxer with manos de piedras (hands of stone).
After Duran does become a sensation, he makes some mistakes that almost cost him his titles and reputation.  The film chronicles these with good pace and timing (the director is Jonathan Jakubowicz), allowing us to see the evolving relationships not only between the fighter and his trainers, but also his wife (de Armas) and Sugar Ray Leonard (Usher).  The film touches on the corruption in boxing that uses fighters as commodities (Turturro’s cameo appearances are appropriately subtle and commanding) and how international events can encroach upon people’s lives.
Cinematography by Miguel Ioann Littin Menz is remarkable, particularly during the boxing matches.  Like a ballet dancer, the camera soars, pauses, and has explosions of color and action, capturing the viewer’s attention with its sheer beauty.
De Niro remains a force in the movie business, and Hands of Stone is his film in a way, although Ramirez more than holds his own in portraying a deeply conflicted man who had to evolve from a scrappy street kid to head of a prosperous household, all while managing the temptations and seduction of fame.  Ramirez capably shows the multi-facets of this personality.  Ana de Armas captures our interest as well in her excellent portrayal of a wife needing to adapt to as well as influence her tempestuous husband.  A delightful addition to this cast is Usher, who plays the patient, charming, and ultimately very insightful Sugar Ray Leonard, a gentleman in the best sense of the word.

Under the guidance of father figures, a tempestuous boxer acquires hands of stone.