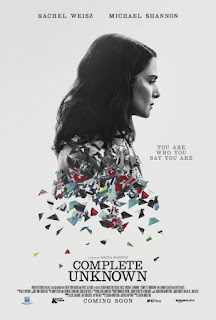 This is one of the most interesting, intriguing studies of identity and attachment issues that I’ve seen.  There are movies about “split personalities” and multiple personality disorder based on the unconscious, but this is different in that Alice/Jenny (Weisz) is consciously changing her name, who she is, and her history, seemingly on a whim.  Or perhaps it’s when she starts feeling trapped (an attachment issue).  She describes an experience of getting to a “blank space” in her identity that feels like a high just before she decides who she’ll be next.
Transforming identities becomes a theme throughout Complete Unknown (a title that may refer to a Bob Dylan song, “Like a Rolling Stone”*).  For instance, when Tom (Shannon) meets Alice for the first time, she appears to be someone else; the name on a birthday cake is misspelled; and there is a sequence in which two people misidentify who they are completely in a game-like way.  At a party, some have fun altering biographical details, whereas others see it simply as lying and become incensed at the notion of doing so.  For myself, I find some humor in it, but admit that I found it unsettling in the beginning of the film when we see the Weisz character in shifting locations, appearances, and surroundings.  Someone’s identity is so central, we get disoriented when they become something like the shape changers in mythology.
Tom is in business with his brother and is married to Ramina (Ghanizada), a talented jewelry designer who has been accepted into a designing school in California.  Tom is clearly feeling torn about venturing out of his comfort zone (home and profession) and launching a different life in California.  He’s having a hard time even discussing it with his wife, and is clearly hoping the dilemma will magically disappear.
When Alice appears unexpectedly at a party and he discovers that she blithely changes her identity at will, he is impatient and judgmental (with some justification, as we see), even horrified.  But he is also intrigued, and keeps pressing her for more details.  Then, when an unexpected situation arises, and she playfully pulls him into a game of pretend, he begins to see a possibility that never occurred to his practical mind before, which will prompt an important transformational change in himself.
Complete Unknown could be seen as a light, entertaining movie that is just for fun.  But writer with Julian Sheppard and director Joshua Marston have something in mind that is more substantive, having to do with taking risks to fulfill one’s potential, or to escape untenable circumstances, or to explore the concepts of identity and personality, and, finally, to address the ethical questions and controversy that arise when people “mess” with something that some regard as God-given, e.g., taking different personas at will, or—more topical—changing gender.

Don’t miss the humor and substance of this absorbing film.

Posted by donnarcopeland at 1:25 PM