SOUTH SIDE WITH YOU 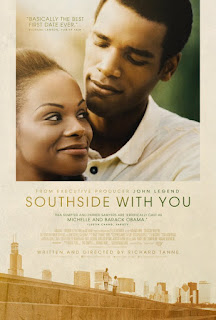 This depiction of the beginning of a love story is something probably every couple wishes they could have.  Of course, it’s done with talented filmmakers led by writer/director Richard Tanne, and is respectful as befitting U.S. President Barack Obama and First Lady Michelle Obama.  At the same time, it’s also delightfully revealing.  I had heard that she gave him a hard time in the beginning, but I hadn’t realized she was so feisty.  (Making me wonder how she transitioned into such a unifier across the years.)
Southside with You shows Michelle’s reluctance to date Barack in the beginning, for good reason; she was his supervisor at a big law firm, and she had to be very circumspect to counteract prejudices toward blacks and women.  And while he was respectful of her opinion, he wanted to date her so much, his charm (her term is “smooth”) eventually won her over.  He only got her to go with him the first time when he invited her to a Southside (Chicago) community meeting, which piqued her interest; but little did she know he planned to spend the whole day with her.  Their interchanges during the date are very entertaining—like listening to two opposing attorneys argue about a very interesting case.  We also witness Obama’s speaking skill in addressing a group, reasoning with doubters, and ultimately winning them over.
Another aspect that was intriguing to me was the way each listened to the other’s personal stories, then had insightful comments to offer.  For instance, after he was critical of his father a couple of times, she observed that he needed to forgive his father and move on rather than “living your life against his.”  What comes across in their discussions is their equality in discussing important, personal matters, as well as their support of one another.  Of course, they laughed and had fun; it was not all seriousness.
Tracy “Twinkle” Bird had a sharp eye in casting Sumpter and Sawyers for the major roles, and the actors came through in looking like the real people through gestures, speaking voices, and demeanors that we have come to recognize and know so well from this famous couple.
I’d like to note that the film is not a “Democratic” product/propaganda; it is genuinely a love story that could be considered typical of well-educated people in their 20’s/30’s, and would be open-ended if we didn’t already know how it turned out.  Tanne’s approach to the material, the tone, and the choices of what to show make the film both entertaining and informative.  The integration of Stephen James Taylor’s music with the drama and cinematography (Patrick Scola) is seamless, making the film a fine work of art.  The final song played during the credits and Scola’s blurring of the picture during transitions reinforces this observation.
I wish we had seen a “To be continued…” sign at the end so we could see more of the everyday life of these fascinating individuals.

A low-key but fascinating story about the beginning of a love affair.

Grade:  A By Donna R. Copeland

Posted by donnarcopeland at 7:58 AM