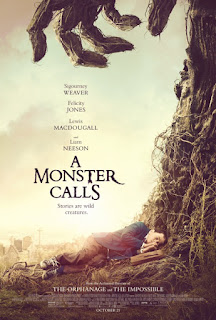 Recurring nightmares can be transformed into a fable to guide a 13 year-old boy in coping with his mother’s terminal illness.   A Monster Calls—originally a novel by Patrick Ness and realized in a movie with the same title by Director J. A. Bayona—uses Conor’s (MacDougall) nightmares to help him accept the anger inside him and face the reality of his mother’s condition.  In the wonderfully artistic, animated film (Cinematographer Oscar Faura, Production Designer Eugenio Caballero and the special effects crew), the Monster (voice of Neeson) is a yew tree near Conor’s house which comes alive as a huge gnarly monster.  The yew tree is considered to have healing powers, but we also find out later that this particular tree is meaningful to Conor’s mother.  Conor is very close to his mother (his father is far away in another country), and they have a special connection in their artwork.


The Monster is not a gentle tree, it comes crashing through Conor’s house breaking up everything in its wake with fiery eyes at exactly 12:07 am.  It will appear three times to tell him a story, and at the fourth time, Conor must tell his story.  Conor resists it with everything he can muster, which is not what he does with the bully at school.  That’s because he is not ready to acknowledge the anger inside.  But after his mother tells him after the Monster’s first visit that the yew tree has healing powers, he asks the Monster for help in making his mother better.
Each of the Monster’s stories produces a strong reaction in Conor that results in destruction, anguish, and agonizing over their meaning.  The Monster’s answers to Conor’s insistent questions (“Who’s the good guy here!?”) involve paradoxes meant to help Conor evolve from his black and white view of people and the world to one that contains the complexities of life and human nature, e.g., “You meant it and you did not mean it.  Both are true.”
An important component of the story is that after Conor’s acting out his anger in various ways, he is not punished.  Instead, when he asks in wonder why, he is told, “What could possibly be the point?”  Adults like his grandmother (Weaver), whom he detests, his father (Kebbell) and the head teacher (Chaplin) take it for granted that he is angry and needs to express it.  Kudos to these wise, insightful authority figures.
A Monster Calls is in the genre of tales like “Hansel and Gretel”, where horrific fantasies are intended to teach principles that help children grow up.  It explicitly and forcefully shows the debilitating effects of cancer and its effect on the patient’s child/children, but it also offers an effective means for children to use to get through the experience.  Art has been shown time after time to be effective in helping children express their thoughts and feelings about illness, death, and loss.  This film beautifully presents a graphic representation of how/why that is helpful.

A raw, realistic look at terminal illness from a bullied child’s point of view, redeemed by a graphic illustration of what can help.