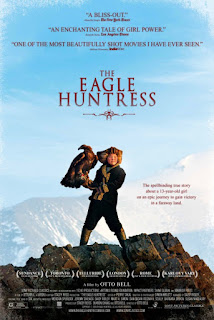 There are so many reasons to see this fascinating documentary about a Mongolian girl.  First is the cultural lesson about eagle hunters who capture an eagle—preferably an eaglet in a nest—develop a nurturing relationship with it, and train it to catch food in the winter.  Another reason to see it is the remarkable story of a girl of 13 who decides she wants to be an eagle hunter like her father and his ancestors before him.  She has worked side by side with him from the time she was very small, and she came to the conclusion herself that she would learn to do what he does first, then eventually become a doctor.  Finally, the father is a model for parenting.  It’s as if he were an experienced behavioral psychologist.
I could keep going on about, for instance, the eagle hunting festival/contest and Aisholpan’s and her father’s trek with horses over stones, cliffs, and through four-foot snow drifts in -40º F weather [e.g., there is a “catcher” who chases the fox on his horse, then the hunter (eagle) who captures the prey]. But I don’t want to give too much away; the joy in watching this film is in the discoveries made in a journey.
Aisholpan is a spunky girl who loves to compete at school (makes A’s) and win at chess, wrestling with boys, etc.  She lives in a dormitory because there is no school near where she lives, and she only goes home on weekends.  She takes care of her brother and sister who also live in the dormitory.  Still, with all this, she has a sunny personality, smiles frequently, and has a zest for life.  She states emphatically that “girls can do anything boys can do if they try.”  Even though she’s committed to the very masculine pursuit of eagle hunting, she still shops at a festival for a bow to put in her hair. Her parents have been fine role models for her, and many Americans will envy their loving, cheerful, cooperative home life where everyone at least appears to be happy and fulfilled.[1]
In some ways, the family’s life is hard.  They have few possessions because they must move back and forth between a tent-like gir in the summer and a house in the winter.  They’re far from even a village.  Still, they have plenty to eat, and are able to secure the relatively fancy clothes required to compete in the annual eagle hunting festival.  When I see how close to nature they are (regarding it as a mother) and contrast it with our frenzy for post-Thanksgiving shopping and stuffed-full houses, obsession with electronics, and social-political conflicts, I have to sigh.  And wonder…
First-time director Otto Bell focuses on the father-daughter relationship while acquainting the viewer with the art (and it is considered an art) of eagle hunting.  To enhance the presentation, Jeff Peters’ music is a fine blend of eastern/western sounds, and Simon Niblett’s cinematography captures the eagle/human chase and hunt for a fox, the intimate scenes inside the gir, and the sweeping landscape of snow in equal measure.  It does seem like we’ve traveled to Mongolia and participated in a cultural experience we’ll never forget.  Daisy Ridley (Star Wars:  The Force Awakens) is a fine narrator, but the real stars are Aisholpan and her father talking on camera as if there were no camera.  They are natural, freely sharing their thoughts and feelings, and exemplifying an ideal parent-child relationship.

This is a must-see for girls, boys, families and anyone interested in cultural exchanges.


[1] Such a contrast with the film I saw earlier today—Nocturnal Animals—where no one is happy or fulfilled, although I think it’s a fine movie.
Posted by donnarcopeland at 11:33 PM