ALL I SEE IS YOU 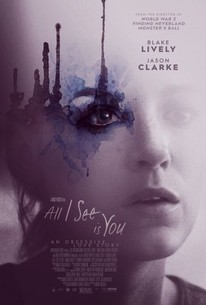 I see little value in this production, except for the cinematography, which is stunning right from the beginning in its visual artistry.  Matthias Koenigswieser cleverly indicates Gina’s (Lively) blindness by adjusting the camera to show a blurry, whitish image with vague spots when scenes are from her point of view.  Many of his scenes are impressionistic and/or like an abstract painting that attracts our attention.  He varies the framing in close-ups, such as when the doctor is examining Gina’s eyes, to sweeping land- and seascapes around Barcelona, Spain.  (The picture was filmed in Thailand and Spain.)  Gina and her husband James (Clarke) live in Thailand, so we also get views of that country with its colorful markets, interesting architecture, and lush parks.
Koenigswieser is well known for his use of lighting, camera technology, and instincts to achieve artistic effect.  Here is a revealing quote: Atmosphere and lighting go hand in hand for me. I feel it makes everything more natural and relatable. In nature as well as interiors you have a different atmosphere all the time which in turn makes for a certain mood. Different weather conditions, light in different countries and continents, a variety of street light on a clear night, fog or rain. Smokey interiors, and open window next to the ocean and a setting sun. The varieties are endless and the best lighting school is nature (https://fstoppers.com/video/what-we-can-all-learn-beautiful-world-cinematographer-mattias-koenigswieser-2920).
Gina and James are very much in love, trying to have a baby, and exploring the possibility of eye surgery that will restore her vision after she lost it in an accident.  He is devoted to her, and patiently serves as her visual aid.  She does have to assert herself sometimes in doing things for herself, such as putting in her own eye drops, which she is clearly capable of doing.  Then she undergoes the surgery, which restores her vision in one eye.
It is delightful to see her rediscovering colors and all the visual complexities of daily life.  He likewise shows pride and joy for her, and in celebration arranges for a trip to Barcelona to visit her sister and her family and to revisit the places they enjoyed on their honeymoon there.  Unrest begins to creep in, though, when she shows dissatisfaction with how she looks (no makeup) and dresses (conservative, bland), and begins exercising her creativity in changing her appearance.  James clearly expresses ambivalence toward these changes, and begins worrying about losing her to someone else.  He starts getting testy and more possessive and controlling.  It doesn’t help when they get to her sister’s, where Gina’s brother-in-law is an artist with few boundaries or restraint.  James begins to resist joining the others in their escapades, and is seen as a wet blanket.  The situation doesn’t get any better once the couple arrives home, and Gina wants to find a new place to live, just another change that is upsetting to James.
Despite ramping up the intrigue and mystery in the last half of the film, co-writer (with Sean Conway) and director Marc Forster have delivered a film with a largely predictable plot that comes to resemble a daytime television show.  The two stars play their roles well; Blake Lively is believable as a blind person and one who regains her sight, and Jason Clarke captures well the Type-A personality confronting change that will lessen his control and reveal the insecurities underneath.  Lively herself is more controversial, with sharp contrasts between the “love her” “hate her” camps.  Clarke is more consistently regarded as a talented actor since his most famous role in Zero Dark Thirty.

See this film primarily for the impressive cinematography.

Posted by donnarcopeland at 4:56 PM