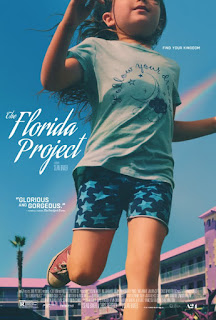 When we see the name of the purple-colored motel in the opening scenes—Futureland Motel—it is a portent that we’re not likely to think about until about half-way through the film.  This was specifically the intent of the filmmakers (primarily, Sean Baker, writer/director/editor), with The Florida Project (“Florida” evoking scenes of pastel frolics and “Project” evoking associations with housing projects) being a commentary on the sorely deficient social services in this country, making the term “Futureland” a kind of ironic statement at best and a dire prediction at worst.  Significantly, the Futureland Motel doesn’t really jive with the saccharine, colorful fantasyland that is Disney, which lies just beyond the reach of the Futureland Motel residents who live on the fringes of society.  (See Sean Baker’s comments about the film below*)
But first, we will meet the children at the motel who live in a world of their own, full of their own fantasies gleaned from the marginal adults around them and their own creative imaginations.  Foremost among these is Moonee (Prince), a natural leader and as feisty a young child as you’ll ever meet.  She can swear with the best of sailors, thanks to her mother’s modeling.  But she is endlessly creative in exploring the world around her, absorbing like a sponge everything she sees and hears.  She is like the smartest street kid in New York City.
Moonee is appealing and very attractive to other children who meet her.  There is Scooty Rivera), whose mother works at a nearby restaurant and charitably hands out food to Moonee, knowing that she and her mother are living on the edge.  There is Jancey (Cotto), who gets acquainted with Moonee under adverse circumstances, but her grandmother, like many of the characters in this film, are tolerant and want to be helpful, so allows Jancey and Moonee to become friends.
Overseeing the motel as the management—although he must answer to its owner—is Bobby (Dafoe), about the only competent adult in the picture, and even he is not sure at times what to do.  But at least he has some sense about how children should be protected, and he exerts his authority as best he can.  I loved the scenes where you expect he will be cross with the children, but indulges their games and plays along with them instead, a real departure from the characters Dafoe usually plays in expert fashion.
This is really a film about children, specifically, Moonee, who is growing up without the help and structure she needs to be successful in life, but is nevertheless very smart, perceptive, and world-wise.  I see the film as asking the question about what will happen to her (and others in her situation) ultimately.  Baker doesn’t hand it to us on a silver platter, so to speak, but poses the question that our socially conscious selves must answer.
This film is hard to watch, primarily because we’re seeing/listening mostly to children’s interactions for most of the scenes.  But it’s also hard to witness the woeful efforts of Moonee’s mother Halley (Vinaite) to parent; psychologically, she is about the same age as Moonee.  So while she is great at acting out their imaginary fantasies in play, she is indiscriminate in what she teaches and models.
Brooklynn Prince’s performance shows an apparently innate talent for acting; this is her first film.  Her lines come out sounding like they come straight from her, rather than from the script co-written by Baker and Chris Bergoch.  It’s also a reflection on the fine casting and direction, in that, except for Dafoe, like Prince, this is the first film for all the main actors—Vinaite, Cotto, and Rivera.
What starts out to be a mundane experience of following children around turns into a socially provocative film of importance to considerations about contemporary American life.

Children on the loose near (not at) Disney World.

*Baker:  …We wanted to make audiences laugh, have fun with these kids and spend the summer with them, but also use this platform to shed a light on what I think is a very important topic.
"Housing is a fundamental human right, and I think the first step toward change is awareness, so if we can get more people to be aware of this national situation," Baker continues. "I hope this movie inspires people to get involved —donation, education, support, advocacy. … Audiences are asking what [the ending] means, and that's important because it has people discussing the ending, which means they're actually discussing the topic." http://www.hollywoodreporter.com/news/florida-project-ending-director-sean-baker-explains-meaning-how-he-did-it-1047215