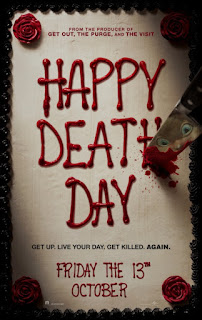 The playful idea (borrowed from 1993’s Groundhog Day) behind this film could have been interesting, but it just doesn’t work for several reasons.  First, all the female figures are so stereotypical they are unbelievable.  (Note that writer Scott Lobdell and director Christopher Landon are both men in their 40’s and 50’s).  Second, it is hard to maintain interest in a story that keeps repeating the same scenes over and over again.  The filmmakers tried to make it as engaging as possible by slightly changing the scenario, which almost works, but it wasn’t enough to keep me from becoming impatient.  Thirdly, the main character is shown to be so obnoxious in the beginning scenes, the viewer has little empathy or sympathy for her during most of the film.  And finally, the resolution(s) at the end are so far-fetched, I had become completely disengaged by the conclusion.
The story is that college student Tree (Rothe) wakes up in a strange dorm room belonging to someone she apparently spent the evening with, Carter (Broussard), who is polite and considerate and attempts to be kind and patient with her.  She is rather demanding (Tylenol!) and gives him a cursory glance before rushing out the door.  She heads to her own dorm room and is greeted by her roommate who tries to give her a birthday cupcake, which she declines.  Throughout the day, she has encounters with her sorority president (Matthews), her professor (Aitken), and others on the university quad.  These scenes are the ones repeated over and over, and at the end of each “day” (because they’re all the same one), she encounters a threatening figure who tries to kill her.
Jessica Rothe is a good actress who manages the persona of this complicated character with ease, and Israel Broussard as the ideal understanding man portrays sincerity and genuine caring.  Rachel Matthews plays her role as the bitchy female leader well; it’s just another role I object to as stereotypical male kind of thinking.
In addition to the actors, the production is well done in terms of direction and cinematography (Toby Oliver).  I would say that the script is the weakest aspect, one that would be very hard to pull off, and one that doesn’t succeed here.

Reliving a death over several days’ time can be tedious.