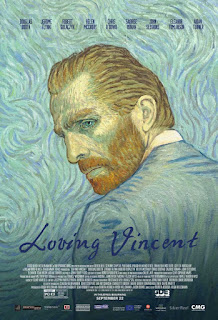 This beautifully rendered film advances like a detective story, beginning with Vincent Van Gogh’s childhood and moving through his life and on to his death, all depicted in meticulously drawn images in brilliant colors like those used by the artist in most of his work.  It seems almost like an eerie prediction/curse when we learn that a son was stillborn before Vincent was born, and his parents chose to use the same name for their second son.  It did not help that his mother was depressed and followed an austere set of religious beliefs.  These circumstances may have set him up for his life.
Vincent did not fit into his family with generations of accomplished men.  Many were informed about art, including Theo, his brother, who supported Vincent financially throughout adulthood when he took up painting seriously in his late twenties.  According to the film, he survived only eight years after that, but left behind an impressive body of work—800 paintings.
The film is noteworthy in several respects.  First, it traces Van Gogh’s personality and mental issues throughout his life plausibly, showing some of the important antecedents related to his distress.
Secondly, the story is told in the manner of a detective trying to establish the actual cause of Van Gogh’s death.  In the film, Postmaster Roulin (O’Dowd) gives his son a letter that was written by Vincent to his brother, but had never been delivered because of the death of both men.  Mr. Roulin had been a friend to both brothers, doubts that Vincent had killed himself, and felt duty-bound to see that the letter is delivered to him if he is still alive.  His son Armand (Booth) must go to Auvers-sur-Oise, France, Vincent’s last whereabouts, and uncover the mystery.  Although initially reluctant, and only wanting to indulge his father, Armand proceeds to the village and gets acquainted with everyone he can who knew Vincent:  His doctor-friend Paul Gachet (Flynn) and his daughter Marguerite (Ronan), the inn keeper and his daughter Adeline (Tomlinson) where Vincent lived, the local policeman Rigaumon (Herdman), the art supplies shop, and the local boatman.  Armand is given conflicting accounts, and he has to reason out the truth for himself—which maintains the viewer’s interest.
Finally, images for the gorgeous animation are created by a team of 100 artists who pattern their drawings after Vincent’s artwork, primarily in the style of “The Starry Night.”  Some historical scenes are shown in black and white, reminiscent of pictures from the late 1800’s.  The music of Clint Mansell supports this work of art perfectly.
Writer/directors Dorota Kobiela and Hugh Welchman should be praised for coming up with this format to tell the story about a tortured artist who did not live to see his acclaim, part of which is that he is regarded as “The Father of Modern Art.”  This tragic figure only had one of his paintings sold during his lifetime.  Although he knew at some level he had the talent, he felt at a loss for convincing others.  Although I’ve heard some of this history and seen the one-of-a-kind Van Gogh Museum in Amsterdam, it was gratifying to be reminded of what I knew and to learn more about Vincent Van Gogh.

Loving Vincent is a fascinating way to acquire some art history.