THE MOUNTAIN BETWEEN US 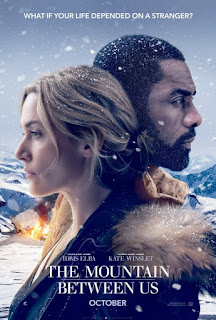 Up in the snow-covered Rocky Mountains in Utah, a small plane is bobbing around, and then it falls.  One passenger regains consciousness and finds he is hurt, but alive.  He is a physician named Ben (Elba), who inspects the other passenger, Alex (Winslet), whom he had only met for the first time in the airport, and is relieved to see that she is alive too, but still unconscious.  He splints her broken leg and awaits her return to consciousness.  Alex is a photojournalist on her way to her own wedding; Ben was on his way to perform an emergency surgery on a child.
This is a major dilemma; there was no flight plan, so no one knows Alex and Ben took this flight, there is no cell phone reception, and all they have are some flares in hopes that a passing aircraft will see them and send help.  What to do?  They argue (she’s much more comfortable with risk), they fight, they help one another through bad scrapes, but don’t always stick together, and through it all she tries to get to know him better, but he is not forthcoming and ends up being rather mysterious.  This will be a story of survival, but will also underscore what happens when two very different people get caught up in such life-threatening events.  Since it is based on a true story, I like so much that the filmmakers elected to include an epilogue to show the aftermath of their ordeal.
Director Hany Abu-Assad has a keen sense for pacing, maintaining suspense, and choosing scenes that convey the amount of effort and psychological fortitude—plus using one’s or another’s sheer wit—to survive under snow-covered, isolated conditions.  The cinematography by Mandy Walker is, of course, breathtaking in landscape, but the close-ups of the actors’ faces and their interactions are impressive as well.
I caught a couple of instances that made me wonder.  I won’t go into detail, but there is a dog on the plane, and Alex and Ben make friends with it.  At one point, a cougar approaches the wreckage and the dog runs out barking, but although the cougar attacks it, the dog lives.  (I thought a cougar would eat a dog in no time.)  The abrasions on Alex’ face come and go; sometimes her face is completely clear, but then later the red spot will be there.
Both Winslet and Elba give superb performances that grab your attention and hold you to the very end.  Their chemistry is infectious, and we end up caring a lot about what happens to them.  There’s a bit of tragicomedy:  Listening to music on the cell phone during the last bit of juice, and “Do you actually think we’re going to make it?!”  But mostly it’s slogging through mountains of snow, cold, hunger, and sheer exhaustion, not knowing how it will all end, yet still you will stay entranced through it all.

If your plane crashes in the snow-covered Rockies, do you know what you would do?  (If you weren’t killed, of course.)

Posted by donnarcopeland at 8:42 PM