THE KILLING OF A SACRED DEER 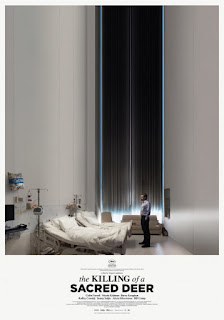 The Murphy family looks like a sea without a ripple in it.  It appears that everything is under control, with little friction, and ever-polite conversation about mundane matters making up the family’s conversations.  Even lovemaking has a ritualistic quality to it.  And yet, occasionally one of them will burst out with some extremely personal information.  Steven Murphy (Farrell) is a heart surgeon, and his wife Anna (Kidman) is an opthalmologist and head of a clinic.  Teenager Kim (Cassidy) is bright, with an interest in music, and younger Bobby (Suljic) is also very bright, but has yet to show particular talents.  They live in a large, orderly house with neatly tended gardens.  What could go wrong?
For some reason—we initially don’t know why—Steven befriends one of his daughter’s classmates, Martin (Keoghan), who is the son of one of his patients who died some years back.  Knowing that Martin and his mother are struggling financially—or perhaps for some other reason we don’t know—Steven treats him to meals and gifts.  Gradually, Martin begins insinuating himself into Steven’s life, appearing at the hospital, calling him on the phone, and meeting him in the hospital cafeteria.  He even invites Steven to his house for dinner with his mother, which, curiously, Steven accepts.  However, while there, he encounters a situation that makes him leave abruptly.
But Martin does not leave him alone; he has fantasies in the form of predictions that, when he voices them, are weird and shocking, but understandable psychologically from what we know of him.  What we don’t understand until the final scenes is the power he comes to have over this family.  And is it his power?  We are left to speculate on the events that transpire during the last half of the film, which have curious resonance with what Martin has predicted will happen to Steven and his family.  And these are dire predictions.
We’re given a clue about the film’s title by learning that Kim wrote an essay at school for which she received an A+.  It was about the Greek myth of Iphigenia, Agamemnon’s daughter who had to be sacrificed because of Agamemnon’s offense of killing a sacred deer that belonged to Artemis.  Without this sacrifice, Artemis would interfere with the winds Agamemnon needed to sail to Troy.
This is a successful truly horrific film that keeps the viewer engaged in trying to figure out what is going on.  The acting is superb, with Farrell and Kidman lockstep in their talents portraying people who are conventional on the outside and with deep recesses in their core personalities.  The “gossip” that surrounds them (and helpful “friends” are only too happy to inform them) raises suspicions, but we never know whether these are reality-based or not.  Barry Keoghan evokes the teenager you definitely don’t want your daughter to date; he portrays a threatening eeriness that you can’t quite put your finger on, and although what he says might be hogwash, a part of you will believe it.
Director Lorgos Lanthimas and writer Efthymis Filippou have collaborated on previous films (The Lobster, Dogtooth, and Alps) that tend toward the mysterious and bizarre, and this is no different.  It will intrigue you and repel you at the same time.  Perhaps Lanthimas selected the music for the soundtrack, which is mostly classical and modern orchestral and choral music—dissonant, even screeching at times, to accompany the feelings of dread and eeriness of the script.  In addition, there are a couple of popular tunes sung by Kim.
The Killing of a Sacred Deer will not be to everyone’s taste, but for those who value creativity and insight into the human condition, it will be a gratifying experience.

Vulnerability to human weaknesses can help explain this drama.

Posted by donnarcopeland at 4:06 PM