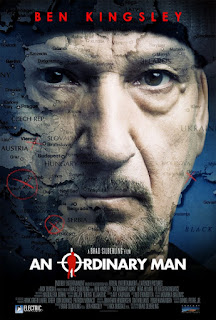 “I will never hide, and I will never be taken”, states The General (Kingsley), the last one responsible for war crimes in Czechoslovakia who hasn’t been captured.  The General is being hidden by his loyalists, transported from place to place for varying lengths of time to keep him away from the authorities.  But The General is not easily corralled; he will not go gently into anonymity.  He longs for some stability and thinks maybe he has found it when his protectors find him an apartment rather than a seedy hotel.
This man is extremely well experienced in counter intelligence and sniffing out potential enemies.  He covers the apartment thoroughly, examining every inch.  But one day someone uses her own key and lets herself in.  He immediately has a gun aimed at her, and she explains that she is the housekeeper for the previous tenant.  He grills her as if it were an interrogation, and her responses fascinate him.  She is obviously poor, has no parents, family, or boyfriend, to which, he says that she is like him, a ghost.  They don’t really exist.  But he “owns” her, she is his, and he will pay more for her than her previous employer did.
The attraction between these two is some of the most interesting material in the film.  Tanja (Hilmar) (or “Maid!” as he calls her) is enigmatic, giving cryptic answers to his probing questions.  She is about the age of his daughter with whom he no longer has contact, so an added complication in the story is his identifying Tanja with her.  The more silent she is, the more he projects onto her his perceptions of his own daughter.  Subsequently, he asks Tanja surprising questions and does surprising things for her, and she remains as mysterious to him as all the women in his life he has known.  It’s a challenge to him to “pierce her veil” and discover who she is.  (The association to his daughter is not to be missed.)
As time goes on, his association of Tonja with his daughter becomes clearer, as he teaches her to cook, buys her clothes, advises her, and defies her when he has a different agenda.  But she is not to be outdone, and surprises him at critical times.  Nevertheless, he has his own plans, and seems to take particular delight in evading those who are charged with capturing him.  This very unusual cat and mouse game, where both identities keep changing, makes the film.  This “ordinary man” may not be so ordinary after all.
Ben Kingsley is well cast as the mischievous, but very experienced and bright, military man.  Hera Hilmar plays her character to a tee, whether it is as the underprivileged no-life maid or the woman she turns out to be.  Writer/director Brad Silberling has produced an intriguing, playful film that should please those interested in war stories and devious plots.  Ben Kingsley is delightful as he always is in playing mischievous-authoritarian characters (not an easy thing to do) with an almost invisible eye to the camera.  Hera Hilmar as the maid-plus is perfectly cast in her simple, unaffecting beauty and her ability to appear mysterious and competent at the same time.

A cat and mouse game different from most any you have seen before.

Posted by donnarcopeland at 12:26 PM