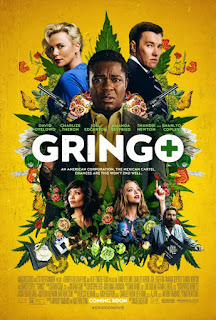 Ugly Americans and Mexican cartels go head to head in this crime story that also wants to be a comedy.  Richard Rusk (Edgerton) and Elaine Markinson (Theron) co-lead a company that is not averse to doing extra-curricular deals.  They have a product being sold in Mexico for them, but when it looks like U.S. states are going to legalize marijuana, they want to market Cannabax (ha-ha--Get it?) in the U.S. and hugely increase their profits.  That will leave no product for the Mexican trade.  Their middle manager Harold (Oyelowo) has been working with the Mexicans for a long time, establishing confidence and gaining their trust, but suddenly Richard and Elaine want to accompany him on the trip to explain to the Mexicans why they are going to stop selling to them.  Harold is left out of all these plans—and many others as the plot proceeds, all while Richard keeps calling him his best friend and making promises of untold wealth.  Call him a dupe.  Go ahead.


The plot by writers Anthony Tambakis and Matthew Stone gets heavily convoluted by incorporating multiple betrayals, Mexican cartels, an amateur American trying to smuggle dope into the US from Mexico (no connection to the other operation), and the DEA into the story.  Oh, yes, and at one point, Richard’s brother Mitch (Copley), is called upon to abandon his altruistic activities in Haiti to help his brother reclaim the kidnapped Harold.  (This is not the only kidnapping that will take place.)
The movie, directed by Nash Edgerton (Joel’s brother), attempts to be slick, funny, and entertaining.  And I think it does achieve the latter, but I was not impressed with the intricacies of plans and subterfuges; and the “funny” is successful in drawing chuckles at times, but it borders on stereotypical portrayal of blacks.  This is Oyelowo really trying to show his comedic chops, and he is funny until you stop and think…
The acting is top-notch by Edgerton, Theron, and Oyelowo, with Edgerton being the profligate with a swagger, Theron with a cold, hard perspective using her sexuality and attractiveness to get what she wants, and Oyelowo with high ideals passed down from his father trying to be noble.  The supporting cast is noteworthy, particularly Amanda Seyfried (Les Miserables) and Sharlto Copley (Chappie), who are two of the only genuine figures in this production.
It’s puzzling why the amateurish drama of a reluctant, naïve drug carrier (Harry Treadaway) and his girlfriend (Seyfried) were included in the mix.  Their paths cross with Harold’s in a sometimes touching way, but they don’t really fit into this story.

For a lightly entertaining romp, Gringo might be your movie choice—just don’t plan to take it too seriously.