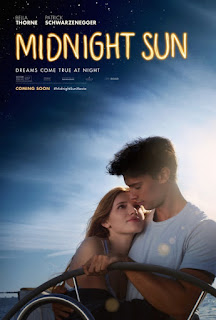 This is a film that might appeal to pre-teen girls in terms of its subject matter, but I wouldn’t even recommend that because it models feeling shame about a physical illness, hence not telling a significant other person about it until way late in the story.  How much better to have the illness out front right away, and show young people how shame and other feelings about illness can be handled.
But Midnight Sun is way too precious anyway, with “perfect” boy, girl, father, friend, and doctor.  All have a rosy spin, so there is no conflict.  God Forbid that anyone would express anger, impatience, jealousy, and, above all, grief.
XP (Xeroderma Pigmentosum) is a disorder in which any sunlight on the body can be life threatening.  That is what Katie (Thorne) and her father (Riggle) are dealing with after her mother died.  She has been home-schooled, and for some reason not explained in the film, has never gone to friends’ houses or to parties at night.  One cheeky little girl named Morgan (Shephard) invited herself to dinner one evening, and the girls became fast friends forever after.  She is a good influence on Katie, and is responsible for Katie meeting Charlie (Schwarzenegger).  The two hit it off, but Katie manages to hide her illness from Charlie.  This only comes out at the end of the story and, well, you can guess from what I’ve said how it goes:  happy ever after.
The only quality I see in Midnight Sun is the acting.  It’s noteworthy that the star Thorne sang and played her own guitar.  The part as written for her, as well as the one for Schwarzenegger, are both super easy to play, and although both do a good job, it’s not especially remarkable.  The same could be said for Riggle.  But the most impressive is Quinn Shephard as the slightly quirky friend who seems more normal than everyone else with her feistiness and love for life.
The film is based on a TV miniseries by Kenji Bando, with a screenplay written by Eric Kirsten.  I have no idea why the filmmakers chose to focus on XP, in that with sun exposure it typically leaves the person with skin malignancies, not a pretty sight.  In this picture in which everyone and everything is beautiful, Katie herself is beautiful with not a hint of skin problems.
Unless you’re willing to go for “pre-teen light”, Midnight Sun is not for you.

Midnight Sun, a contradiction in terms in more ways than one.

Posted by donnarcopeland at 10:38 AM